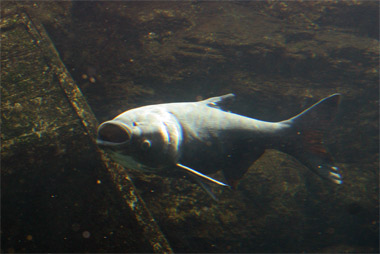 Unwelcome guest -- A bighead Asian carp swims in an Illinois waterway. Fishery and economics researchers at Southern Illinois University Carbondale are using a $1.1 million contract with the state that will help the fish industry take advantage of this invasive fish species even as it attempts to eradicate it.  (Photo provided) Download Photo Here

Solution to Asian carp problem may be in kitchen

CARBONDALE, Ill. -- Illinois residents know the Asian carp as an undesirable invasive species that is ruining state waterways, crowding out game fish and, occasionally, knocking out boaters by hurling their considerably large bodies out of the water.

But researchers at Southern Illinois University Carbondale who are studying the problem fish are looking into the possibility that residents might instead come to know the ugly critter by another name: “Dinner.”

Working with a $1.1 million grant they received last year, the researchers are studying the economics of turning this river menace into a cash cow.  And for one day in September, the researchers will join forces with a Louisiana-based chef who believes the fish’s mild flavor is a perfect canvas on which to paint flavorful dishes.

Next week, Chef Philippe Parola will conduct a cooking demonstration on the SIUC campus.  Parola, who says the meat texture of the carp is somewhere between that of a scallop and crab, will serve up his tasty delicacies during a Hospitality and Tourism Administration class set for Thursday, Sept. 8.

On Sept. 9 and 10, Parola also will conduct cooking demonstrations at the Neighborhood Co-op grocery store and the Carbondale Farmers Market.

James Garvey, director of the center, said Asian carp populations are growing and now are threatening the Great Lakes.  Government agencies, he said, currently have no “silver bullet” to control them.

"We have a problem here in the U.S.,” Garvey said.  “However, Asian carp are palatable, relatively low in contaminants and abundant.  A large proportion of the world's population considers them to be a desirable fish.  After all, they are the most aquacultured fish in the world.”

A large, bony fish, Asian carp are present in the upper and lower portions of the Mississippi River, the lower Missouri River, the Illinois River and Ohio River. Several varieties -- including the bighead and the silver, which can grow to 100 pounds and leap into the air -- are present in Illinois waterways.

During the last decade, the state has taken action to prevent the fish, which crowds out native species and damages their habitat, from becoming prevalent in the Great Lakes fisheries.

Commercial fishing on the country’s rivers does present a potential weapon in the struggle to control the Asian carp’s numbers, however.

“We just need to convince the public that it is OK, and in fact environmentally responsible to try to eat these things to extinction,” he said.

SIUC researchers are working with the Illinois Natural History Survey to look for ways to establish a new fishery aimed at harvesting the Asian carp.

Another SIUC researcher working on the project, Silvia Secchi, is examining the problem from an ecologically economic point of view. Secchi, assistant professor of agribusiness economics, along with doctoral student Sarah Varble, are looking at the potential of different strategies for turning the Asian carp biomass into something valuable.

Secchi said the fish, while often seen as a menace, has several things going for it as a potential economic resource. It has a mild flavor and is among one of the healthier fish for consumption, given its plankton feeding habits. In China, where the head of the big head variety is used to make soup, the fish has been hunted to near eradication, meaning there could be a large overseas market that Illinois commercial fishermen and women could fill.

One of the main thrusts of the research, therefore, is determining whether a production industry based on harvesting the fish might be viable.  A major obstacle to opening such a market might be the fish-eating public’s perception of the Asian carp. One of Secchi’s first tasks involves creating and interpreting a marketing survey that will measure such attitudes toward the fish, looking at such issues as price, heath benefits and demographics.

They also will test attitudes toward a proposed marketing name for the fish: Silver fin.

“Would people be more likely to try it if it was called that?” Secchi said.  “We really don’t know the relative importance of those issues, so this will be the first time they are scientifically measured.”

The idea of basing an industry on harvesting the fish is not without controversy.  One side would like to simply eradicate the population because of the ecological damage it causes as an invasive species.  But if there is a market for the fish, others might want to sustain its population at some level.

There are many other questions to answer from this bio-economic model.  For instance, what would high public demand for the fish mean for its populations?  And in turn, what would that mean in terms of the fishing industry and infrastructure needed to supply such a demand?

Garvey’s group also is using hydroacoustics to conduct population studies of the fish in the Illinois River. They are looking at the origin of the fish there and their quality as a potential food item or commercial product, Garvey said, examining factors such as their protein, fat and oil content.

Parola is one person who is well convinced of the fish’s potential as a food item.

“Why do we call this fish a pest, when there are so many good things about it?” he said.  “This fish is the best-kept secret in the market. It’s extremely healthy and it can be prepared so many different ways.”

The only obstacle, Parola said, is finding a way to debone the notoriously bony carp.  But he claims to have come up with a process based on existing U.S. food preparation technology that would process up to 40,000 pounds of the fish each day at a single plant.

Parola said his support of the fish as a food item dates back to a day when one -- as they are known to do -- jumped into a boat.  He took it back to his restaurant, prepared it like any other fish and was shocked by its good flavor and appealing texture.

He acknowledges overcoming the negative perception of the fish might be an obstacle, but he concentrates on other hurdles such as creating a market and providing incentives to fishing companies to haul the fish back to markets.

“The reason we call the fish a pest is because no one has taken the effort to break it down and try it,” said Parola, who will do just that during his demonstration at SIUC and around Carbondale next week. “I’m going to demonstrate this, and my theory that this fish can be a gold mine for economically depressed states.  I’m saying we need to look at this from another angle.”

Garvey said he hopes the overall research effort answers questions about the fish’s true numbers in the Illinois River and how its basic population dynamics work.

“Without grasping this, we cannot determine how much fishing effort is necessary to fish them to become functionally extinct and to get them from expanding toward the Great Lakes,” Garvey said.

He also hopes the research will help determine policy governing the species’ population in Illinois waters.

“We know there is an export market to Asia for carp.  However, the fish would be more beneficial economically if they are sold here.  We are helping industry determine options for a domestic market here,” he said.  “The final goal is to determine what the end game should be if we are indeed successful in over fishing these species.  Obviously, a move toward sustainable harvest of wild native fish and aquaculture of native fish would be desirable.  But we need to know how to get there.”