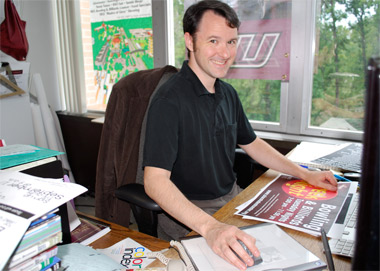 Job on campus/department you work in:  Graphic design associate for Student Center.

How long at SIUC:  Six years

When you were a youngster, what did you want to be when you grew up?  A myriad of things -- astronaut, scientist, cartoonist, animator.  I was (and still am) fascinated by science and the universe in general.  But in the third grade my class was shown a PBS show about a comic artist, thus began my plunge into drawing.

People don’t know that …I’m a webcomic artist and drew and finished one comic called Indavo and I currently work, along with a co-author, on another webcomic on Shamus Stone.

If you could choose another profession, what would it be and why?  Film-making or space sciences.  Both would (hopefully) still allow me to use my imagination and be interesting.

What is something you still want to accomplish in life?  Perhaps get back into animation.  It would be much easier nowadays with all the helpful computer programs out there.  One day I must find the time for such a large undertaking.

What was the first “album” you ever bought, and was it an LP, 8-track or CD?  I’m not sure but I think it was a Star Wars cassette tape.

If you could pick an actor/actress to play you in a movie, who would you pick and why?  Rowan Atkinson (AKA Mr. Bean), for sometimes I have my Bean moments.  Or, maybe Karl Urban as he’s a wee bit more striking than Rowan.

What is one random fact about you? I like Doctor Who, quite a bit actually.

Cats or dogs?  Cats.  They have only been domesticated for 10,000 years or so and still have that independent streak.  Well, in theory anyway.  Mine seem to be a wee bit on the co-dependant side.

What is your favorite food and why?  Lasagna.  Does this need explaining?  What’s not to like?

Favorite cartoon character? Why?  Galvatron from Transformers.  Although he’s just Megatron in a new shiny purple casing, he’s quite good in Transformers the Movie (1986).  He really branches out in the third Transformers’ season, by becoming mentally unstable.  Normally, this would not be a good development.  However, he loses as much as Megatron did, but he was much more entertaining.  The runner-up would have to be Arsine Lupin III from Lupin the Third.  He’s sort of a goofball James Bond-ish sort.  Oh, the levels of geekdom on display here….