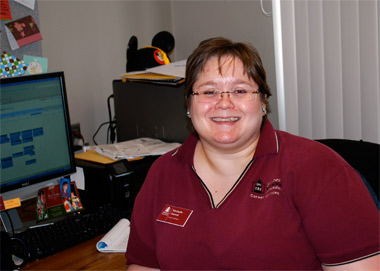 How long at SIUC: Seven years as of November 2011

When you were a youngster, what did you want to be when you grew up? The Bionic Woman or an archaeologist.

People don’t know that you … Are an avid science fiction fan -- I can’t get enough Star Trek: The Next Generation!

If you could choose another profession, what would it be and why? A paranormal investigator.  I have always been fascinated with the paranormal and other unexplained phenomenon.  It would also be cool to have my own show on A&E or SyFy!

What is something you still want to accomplish in life? I want to swim in the Mediterranean Sea.

What was the first “album” you ever bought, and was it an LP, 8-track or CD? Michael Jackson’s “Thriller,” cassette tape.

If you could pick an actor/actress to play you in a movie, who would you pick and why?  Kathy Najimy – she’s a great actress and she has some junk in the trunk.  Let’s face it, no scrawny actress is going to play me, and I’m cool with that!

What is one random fact about you? I think the answer to the world’s problem’s may be found between the pages of any Calvin and Hobbes publication by Bill Watterson – much wisdom may be found there.

Who has inspired you, and how? Johnny Cash.  I have always liked his music, but more importantly, he made some mistakes, learned from them, and moved on.  Isn’t that what we all strive for in our lives… learning from our mistakes?

What is your pet peeve? People who do not return their grocery carts to the return bins.  That’s just lazy!