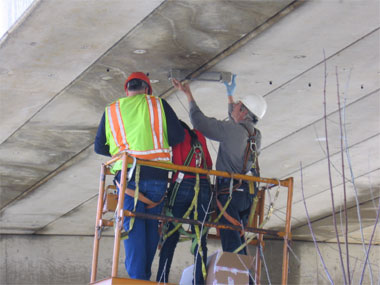 Installing sensors -- Researchers from Southern Illinois University Carbondale install deformation sensors beneath a bridge spanning the Big Muddy River on Illinois Route 127 between Murphysboro and Carbondale earlier this year. The researchers are experimenting with wireless sensor technology that could monitor the ongoing “health” of a bridge in real time while freeing up valuable resources for the state workers whose job is ensuring bridge safety. (Photo provided) Download Photo Here

CARBONDALE, Ill. -- The thousands of bridges across Illinois bear the economic and social loads of society. They stand, 24-7, getting people over waterways, valleys and other obstructions quickly and safely.

But these essential transportation components also constantly are exposed to the elements. Water, cold, heat and other factors all play a role in their deterioration. Transportation officials typically send teams of engineers to visually inspect bridges for safety, but the system leaves room for improvement in terms of cost, efficiency and thoroughness.

Now, a group of researchers at Southern Illinois University Carbondale is experimenting with wireless sensor technology that could monitor the ongoing “health” of a bridge in real time while freeing up valuable resources for the state workers whose job is ensuring bridge safety.

Tomasz Wiltowski, professor of mechanical engineering and energy processes, is leading a team of student researchers as they design, build, install and monitor a network of sensors located on a Southern Illinois bridge. Plugged in to the Internet via wireless technology, Wiltowski and his team can watch the data as it is created on any computer. (To view the project, go to http://mtc.engr.siu.edu/muddy/index.html#gageInstall).

It’s all aimed at creating a network of Internet-based wireless sensors and databases that can provide near real-time data and analysis on the structural soundness of transportation infrastructure, including bridges.

“The efforts of Professor Wiltowski and his students are vital to the safety of the traveling public,” Chancellor Rita Cheng said. “This project reflects the emphasis we place on conducting cutting-edge research that provides solutions to issues in our communities and throughout the global society.”

Wiltowski is carrying on the work of former SIUC professor Shing-Chung “Max” Yen, who acquired the original $1 million grant from the Federal Highway Administration’s Intelligent Transportation Systems program. Wiltowski’s grant, also for $1 million and runs through at least 2012, will help develop the technology that combines integrated sensor networks with wireless technology and powerful analysis tools.

The team is testing the new system on a bridge spanning the Big Muddy River on Illinois Route 127 in Murphysboro. The bridge is made up of seven spans using 13 concrete beams per span for support. State inspections have shown the bridge is experiencing some deterioration and uneven wear under traffic loads, Wiltowski said.

The data system, if it works as researchers hope, potentially could improve transportation safety and efficiency. Engineers also could apply such systems to many other situations, such as security systems and environmental monitoring.

Wiltowski and Aishwarya Vasu, a doctoral student in electrical engineering, and Jialing Huang, a doctoral candidatein engineering science, can even tell what type of vehicle is rolling over the bridge at any given time, based on the data signature it creates.

“Here comes a big truck from Murphysboro to Carbondale,” Wiltowski remarked, watching the data jump on a computer screen at the Engineering Building on campus.

The rubber meets the road with an array of six deformation sensors the team installed this spring. The sensor, which the team designed, consists of a long, thin piece of aluminum with embedded electronic components that can sense how much the metal flexes or “deforms” between both its ends, both of which are affixed to two different support beams. As vehicles pass over the bridge, the researchers can watch the effect in real time as the sensors send back data.

Over time, the data should reveal important structural information about the bridge’s well being when it is correlated with other observations.

“Corrosion is a major factor, and we think we’ll be able to see its effects in the data as time goes on,” Wiltowksi said.

Attaching the sensors beneath the road surface of the bridge and above the Big Muddy River was no easy task for the team this spring. The Illinois Department of Transportation, however, supplied one if its few so-called “snoopers” to help the researchers out.

The snooper somewhat resembles a typical worker lift platform. The main difference, however, is the boom is hinged in key places, making it possible for the main portion of the machine to sit on the bridge while lifting personnel up over the railing and then down beneath the bridge where they can access the bridge’s underside.

“It was a very nice opportunity to use the machine, and we got it free because of our good relationship with IDOT through this project,” Wiltowski said.

The sensors they placed would be of no use, however, without a power supply. The team chose to power the sensor array and wireless capability using only solar power hooked to a battery system. This makes for a totally self-contained system that doesn’t rely on external power, a real advantage for such sites as they are likely often located in remote areas.

The group also is working on additional sensors that they hope to add to the “team,” including temperature sensors and ones they hope will be able to monitor corrosive oxidation as it is happening.

Such a sensor, which would trap iron oxide ions as rust occurs in bridge components, would potentially represent an entirely new type of sensor technology and could show the rate at which corrosion is occurring on the bridge. Bakul Dave, associate professor of chemistry and biochemistry, is heading up that part of the effort.

In the end, the team hopes an integrated network of various sensors will revolutionize the way societies care for their most vital infrastructure components.

“It is a very challenging problem with exciting possibilities,” Wiltowski said. 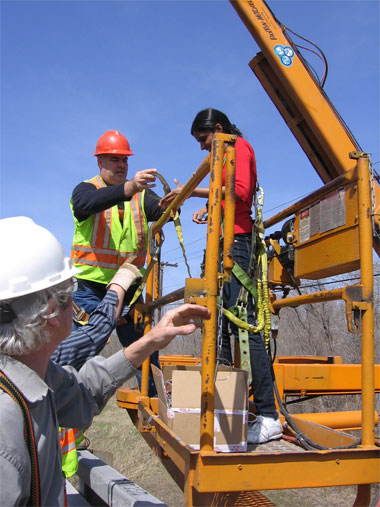 Getting ready -- Aishwarya Vasu, a doctoral student in electrical
engineering at Southern Illinois University Carbondale, prepares to
ride a "snooper" provided by the Illinois Department of Transportation
to a point beneath a bridge where she and other SIUC researchers
installed a sensor network this year. (Photo provided) Download Photo Here 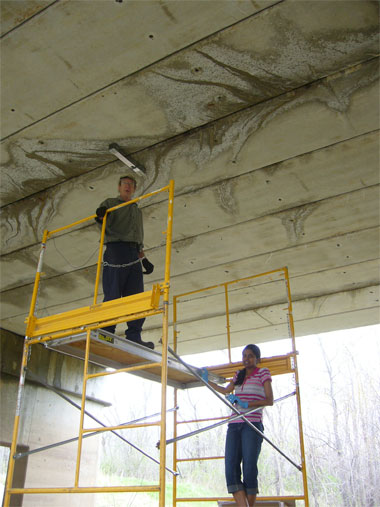 Under the bridge -- Aishwarya Vasu, a doctoral student in
electrical engineering at Southern Illinois Unversity Carbondale,
and Bill Simmons, a technician with the SIUC Materials Technology
Center, work on installing deformation sensors beneath a bridge spanning
the Big Muddy River on Illinois Route 127 between Carbondale and
Murphysboro. (Photo provided) Download Photo Here