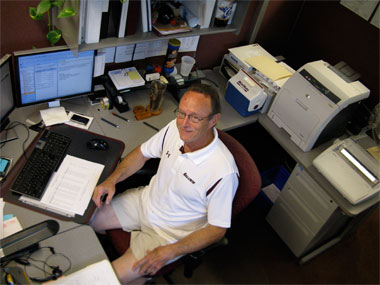 Job on campus/department you work in: P-Card Administrator in Procurement Services

When you were a youngster, what did you want to be when you grew up? A veterinarian.

People don’t know that you… Used to pilot single-engine aircraft.

If you could choose another profession, what would it be and why? A corporate pilot, because I would love to fly the smaller jets.

What is something you still want to accomplish in life? Take a vacation to Australia.

If you could pick an actor/actress to play you in a movie, who would you pick and why? Brad Pitt. Because I look nothing like him and it would blow people’s minds that he was portraying me.

What is one random fact about you? I love horseback riding.

What is your favorite food and why? Chinese food. I love preparing it, which makes me think I was a Chinese chef for an emperor in a previous life.

Who has inspired you, and how? My father. He was the most un-materialistic person I have ever known and would give you his last dollar if you needed it.

What is your pet peeve? People who continue to text while driving even though it is illegal.

What would you like your gravestone to say about you? He had one helluva ride full of fun and laughter.