Hannah Kalk, who just competed her graduate work in plant biology at SIUC, and Adam Chupp, a current doctoral student in plant biology, both garnered the opportunities at the NOAA’s Grand Bay National Estuarine Research Reserve on the coast of Mississippi. Both students worked in the SIUC Wetland Ecology Laboratory under the advisement of Loretta Battaglia, associate professor of plant biology.

Kalk, who currently is interning with the Illinois Department of Natural Resources in Southern Illinois, served a two-year graduate research fellowship with NOAA. Her work involved examining seedbanks of plant communities along the coastal areas and inland. Using greenhouses, Kalk also exposed seeds to experimental, simulated saline “storm surges,” mimicking the effects of hurricane storm surge. The effort helped evaluate how hurricanes influence the emergence of different species from the seedbank.

Kalk wrote a manuscript and is working with Battaglia on submitting an article to the American Journal of Botany based on this part of the work.

Working in the same area, Kalk collected banks of propagule -- plant structures that detach and give rise to new plants -- from across this coastal-inland gradient and planted them in five common gardens established on home sites bought out by the Federal Emergency Management Agency.

Battaglia said climate change already is causing a shift in the areas’ environments and restoration efforts have to take this into consideration.

“Restoring plant communities that are more indicative of historic conditions may not be the best idea,” she said. “Rather, Hannah elected to experimentally test increasingly futuristic

To do this, Kalk planted in a variety of media, including salt marsh, brackish marsh, freshwater marsh and pine island environments. She also planted in pine savannahs as a historical reference and comparison.

“She found that fresh marsh transplants did the best and that species from the saltier end of the gradient could establish and hang on to some degree,” Battaglia said. “The work suggests that we can implement futuristic restorations to some degree. This work is the first of its kind, and we are very excited to put this together in a manuscript for publication very soon.” She will also give a presentation at the Society for Ecological Restoration International in Mexico in August.

Chupp will study the impacts of laurel wilt disease on communities along the Gulf Coast and Atlantic Coastal Plains. The disease is caused by an exotic species of fungus carried by the exotic Asian ambrosia beetle. Avocado plants are among its victims, as well as a plant known as redbay.

Chupp will study the problem from a site at the NOAA Grand Bay station and is busy setting up another site on the Atlantic coast in South Carolina. That area is near the site where the disease was first introduced.

He will study the plant community and how it changes when the disease attacks redbay, as well as the effects of losing that plant on palamedes swallowtail butterflies, which use redbay as their preferred host, Battaglia said. Chupp will also look at the fruit preferences of birds that disperse redbay, especially looking at camphor tree, an exotic tree from Asia that might possess a functional overlap with redbay, which is in its family, too.

“This is a particularly interesting and novel aspect of his work: whether an exotic species can provide some functional redundancy and thereby convey resilience to the ecosystem in the face of an emerging disease,” Battaglia said.

The nation’s first scientific agency with roots that run to 1807, NOAA’s research endeavors range from the surface of the sun to the depths of the oceans. Along with its daily weather forecasts, severe storm warnings and climate monitoring, the organization also works in the area of fisheries management and coastal restoration, among others.

“Receiving a NOAA graduate research fellowship is an honor and provides a number of opportunities for professional development, networking, and an amazing arena in which to do research,” Battaglia said. “The National Estuarine Research Reserve System is set up to support and facilitate research and education. This program is competitive, so it stimulates creativity and rewards excellence in our young scientists. In so many ways, it is helping to train the coastal scientists of tomorrow.” 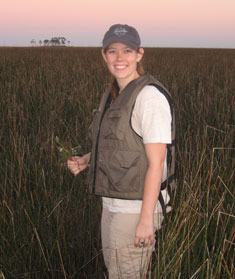 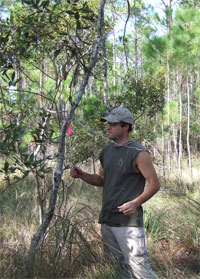