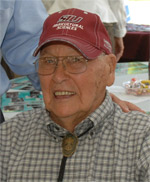 CARBONDALE, Ill. -- Wendell E. Keepper, the first dean of what would become the College of Agricultural Sciences at Southern Illinois University Carbondale, died Wednesday (June 22) at his home in Carbondale. He was 100 years old.

Arriving at SIUC in 1950, Keepper oversaw a small department in the then-College of Vocations and Professions from a prefabricated structure near Student Center, serving under SIU President Delyte Morris. From that seedling of a program, the Montgomery County native guided the creation of the University’s School of Agriculture in 1955 and it subsequent growth and success over the next 24 years.

By 1974, when he retired, the School of Agriculture had grown to international stature, with 59 faculty and staff, more than 850 graduate and undergraduate students and an annual budget of more than $1.5 million.

Chancellor Rita Cheng expressed condolences on behalf of the University to Keepper’s family.

“Dean Keepper was passionate about the role of our University in advancing agriculture,” she said. “Our students, faculty and staff, and our many industry partners, continue to benefit from his wisdom and leadership.”

Todd Winters, interim dean of the College of Agricultural Sciences, said Keepper’s vision and leadership were crucial to putting it on the road to success.

“Dean Keepper was a very important part of our college's history,” Winters said. “His vision has resulted in arguably the most successful non-land grant college of agriculture in the country.

Keepper (pronounced KEP-per) earned his master’s and doctoral degrees at Cornell University and taught a dozen years at Pennsylvania State University before coming to what was then simply SIU. Arriving on campus, he found conditions that were “not entirely encouraging,” as the University was entering a period of growth and change.

The agriculture department had just five faculty members and a budget of little more than $70,000. The University had a small research farm of about 70 acres where the Engineering Building and baseball stadium now sit. Keepper, who served as chair of the department, said its faculty taught classes in converted army barracks and there was no agriculture building on campus. The University, by legislative order, couldn’t even award a degree in agriculture at that time.

“Our office facility at the time was a Sears Roebuck pre-fab house just south of the north end of the current Student Center,” Keepper recalled for a previous University news release. “I remember my first official act was to move a Coca-Cola dispenser from the first floor room to the front porch to make room for a beat-up desk I had salvaged from the war-surplus depot.”

Just three years after arriving, however, Keepper helped launch the agriculture education track at the University. As the state political winds began blowing in SIU’s favor the agriculture department left the College of Vocations and Professions and adopted the title of the Division of Rural Studies. In 1955 it would become the School of Rural Studies and, months later, The School of Agriculture.

Five years after arriving at SIU, with no ag building and no plans to build one, Keepper looked on as Gov. William G. Stratton laid the cornerstone for the new agriculture building. It opened in 1957 and continues serving students today.

Born in Hillsboro, Keepper was known for his love of Southern Illinois; both the place with its unique agriculture characteristics and its people. His efforts in promoting agriculture education enjoyed strong support among the rural communities surrounding the University.

“We felt it was our job to train young people of Southern Illinois and others from different parts of the state interested in the profession of agriculture so that they could help solve the problems facing our agricultural society,” Keepper said in 2005. “Our intent was to train them well in an up-to-date fashion so that they could compete with graduates of other universities for jobs in teaching, research, production and other fields.”

In subsequent years Keepper set about building curriculum and a platoon of high-quality faculty, insisting all new hires have doctorate degrees and be leaders in their field. The school continued to grow in both size and scope during his 24-year tenure, with his legacy leading to its current worldwide reach in countries including Brazil, Afghanistan, Russia, Pakistan and Zambia.

Upon his retirement in 1974, Keepper saw one of his former students, Gilbert H. Kroening, take his place as dean of the school. Kroening, who has since retired and still lives in Carbondale, said Keepper’s openness and outgoing style convinced him to enroll in the fledgling SIU bachelor’s degree program in 1955. From that point on, he was witness to Keepper’s strong leadership and vision.

“He was the right person at the right time,” Kroening said Thursday. “The University was going through a post World War II expansion and ‘Kepp’ was brought in with the opportunity to build an ag program.

“He was a man of determination and vision,” said Kroening, an Effingham County native who in 1959 was among the first class to earn a bachelor’s degree in agriculture at the University, and who would go on to earn his master’s degree here in 1960. “He was a strong leader but he also was humble. He never craved recognition for himself. He always did what was in the best interest of the program.”

Keepper earned his Bachelor of Science degree in 1933 at the University of Illinois. He earned his master’s and doctoral degrees at Cornell University.

Keepper’s survivors include two brothers, Howard Keepper of Hillsboro and Melvin Keepper of Decatur; and his daughter, Holly (Keepper) Immel of Makanda. He was preceded in death by his wife, Alta (Lewis) Keepper, his daughter, Carolyn Grace Lassiter, and two sons, Roger A. and Christopher C. Keepper.

Burial will be at Pleasant Grove Memorial Park.