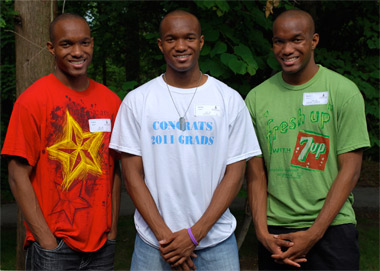 Times three -- When the Jackson brothers from Peoria begin college at Southern Illinois University Carbondale this fall, they will be leaving home but bringing family along with them. The brothers, identical triplets, are, from left: Sedrick, a mechanical engineering major; Sterling, a civil engineering major; and Spencer, a sports administration major. (Photo by Andrea Hahn) Download Photo Here

CARBONDALE, Ill. -- Family support will always be close at hand for a trio of freshmen who begin their college careers this fall at Southern Illinois University Carbondale.

The three say they are excited to be leaving home to strike out on their own, but also happy that family is coming along to college with them. SIUC, meet the identical Jackson triplets: Sterling, who plans to major in civil engineering, Sedrick, who will major in mechanical engineering, and Spencer, a sport administration major.

The three brothers will live in a residence hall together, but their declaration of intended majors speaks to their different interests.

The brothers have always received a bit of attention, and not only because they look so startlingly alike. They graduated among the top 10 percent of high school students academically, they were Honor Roll regulars at Peoria High School, and they participated in orchestra and excelled at track, forming the majority of a relay race team. Sterling and Spencer also ran cross-country, while Sedrick tried football.

When they came to campus for New Student Orientation last week, they were already making plans to get involved in campus life, asking about Rush Week and pledging to fraternities, maybe intramural sports, certainly the SIUC track team try-outs, the University Honors program.

“We wanted to go away from home, but not too far,” Sedrick said. “When we first came to this campus for a visit, we fell in love with it.”

“We’re sharing a residence hall, but we are taking different classes,” Spencer said. “We’re ready to be independent.”

Sterling said being one of three identical triplets can be a bit of a rollercoaster emotionally. Still, they said, the three of them can argue sports 24/7, and they expect to be able to help each other with homework and the adjustments to college life.

“It’s like bringing your two best friends home with you every day,” Sedrick said.

“We have been blessed,” Annette Jackson, the triplets’ mother, said. She noted that her sons have a large network of family for support, including aunts, uncles and cousins. She said community members also have shown support for her sons, acting as mentors and cheerleaders as needed.

“It’s a challenge,” Steve Jackson, father of the three brothers, said. “It’s the next big step for them.”

Annette teaches business courses at Manual High School in Peoria. The brothers also have a sister, Tanya, who lives in New Jersey with her husband and daughter and works as an engineer.

Sterling and Sedrick will get a jump on their brother when it comes to getting to know campus. Both will be here for the College of Engineering’s Summer Bridge Program, a six-week, intensive study camp for new students majoring in engineering.