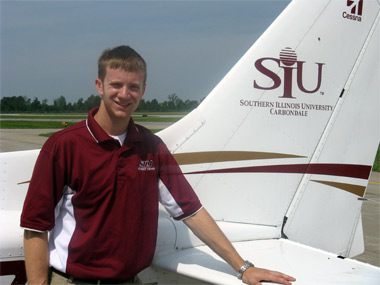 CARBONDALE, Ill. -- As one of three team captains and an individual event titlist for the Southern Illinois University Carbondale Flying Salukis, Daniel S. Harrington was among those making key contributions last month when the team won its first national title in 26 years.
Harrington, a senior in aviation management from Monee, will also contribute to collegiate aviation on a national level during the upcoming year. He is the student representative to the National Intercollegiate Flying Association’s 18-member national council.
Harrington was one of five collegiate aviation students nationwide to interview for the seat. Harrington’s selection, based on votes by competing schools, came prior to the Flying Salukis learning they captured the program’s seventh national title in school history, May 21, at The Ohio State University.
Harrington’s term is from July 1 to June 30, 2012. He is the son of Nancy Curry of Monee and Daniel Harrington of Kankakee.
A returning captain for the 2011-2012 season, Harrington has been on the team since he was a freshman. It was those three years of positive experiences that prompted his decision to seek the post. He will be a voting member of the board and represent the student competitors, sharing any of their concerns or recommendations about competition.
“I wanted to do it to give back to NIFA,” Harrington said. “It’s a great organization and has given me so much. I’ve met so many people and have been able to do so many things because of what NIFA has given me the opportunity to do.”
Harrington said his experiences as a member of the Flying Salukis through the NIFA competitions have made him a better student and pilot.
“For me, it has defined my college experience,” said Harrington, whose goal is to be a commercial pilot. “I’ve gained friendships and friendships within the industry that I will have for life. We put in a lot of practice and study outside of our normal flight slots, and I think I’m a better student because of it.”
David A. NewMyer, chair of SIUC’s Department of Aviation Management and Flight, said Harrington is the first Flying Salukis’ member in recent history selected as student representative to the NIFA Council.
In his role on the NIFA Council, Harrington is the direct voice of all NIFA student competitors from each of the NIFA member schools throughout the nation. There are approximately 75 teams from throughout the country that participate in the national competition. Anywhere from 300 to 350 aviation students compete annually at the organization’s Safety and Flight Evaluation Conference (SAFECON).
The NIFA Council meets three times a year, and the organization pays all of Harrington’s travel and lodging expenses.
NewMyer and Nathan J. Lincoln, the Flying Salukis’ coach, point to Harrington’s devotion to the team and being a NIFA member. Harrington has been to the national competition each of his three years, and won the simulated comprehensive area navigation (SCAN) competition last month.
Nominated by the Flying Salukis, Harrington also led a team captains meeting during the competition, Lincoln said.
Harrington’s talent, in addition to his three years of competition experience, will enable him to make “well-grounded and educated decisions,” Lincoln said.
Lincoln has watched Harrington grow from a new team member “to an invaluable team captain.”
“Dan’s personality allows him to get along with everyone while leading our team to countless accomplishments,” Lincoln said. “Dan will now be able to communicate new ideas to find ways to better the NIFA organization.”
Harrington is also part of the SIU Aviation Student Group Leaders, which NewMyer assembles each month during the fall and spring semesters. The group coordinates all student group activities and works closely with student volunteer activities including the American Airlines, United Airlines, and Corporate Aviation career days, NewMyer said.
“Dan has been a very faithful part of this group, which goes beyond being just a Flying Saluki … it is a measure of his service to the aviation program at SIUC and to his fellow students,” NewMyer said. “It also speaks at to why Dan is such a great choice for this role with NIFA, as both a representative of SIUC and of all NIFA student members nationwide.”