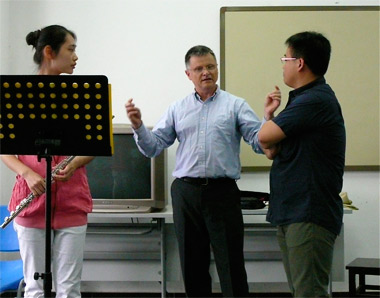 Not lost in translation -- Douglas Worthen, center, conducting a master class at GuangXi University in Nanning, China. In a master class, a small number of students work individually with the instructor, while a larger group of students sits in to learn. For this master class, Worthen lectured in German, which the translator rendered into Chinese for the class. Worthen said the medium of music seemed to make communication easier. (Photo provided) Download Photo Here

Worthen uses his music to promote SIUC in China

CARBONDALE, Ill. -- Have flute, will travel.
Douglas Worthen, lecturer in flute and music history at Southern Illinois University Carbondale, is using music and the opportunities music brings him to promote the SIUC School of Music as part of his summer music activities.
Worthen recently returned to the United States from China, where he spent most of the month of May. Worthen’s travel opportunity grew from a performance in New York City, where he was spotted by a flute builder and entrepreneur with ties to China and a desire to promote classical Western flute music there.
“You never know how things will play out,” Worthen said, explaining that what started as a casual conversation turned into a substantive offer and travel plan.
Worthen said one of his goals in traveling to China was to promote the University, particularly because SIUC has been establishing connections with several Chinese universities. In particular, he noted the SIUC Wind Ensemble and SIUC Concert Choir tour of China in 2009. He thanked SIUC Chancellor Rita Cheng for her role in the nearly year-long negotiations that led up to the China trip.
Worthen visited both GuangXi University in the city of Nanning, and Guizhou University in the city of Guiyang. Both cities have more than six million residents, Worthen said, noting that admission to the schools of music in the two universities is highly competitive.
“It was just fantastic to be there,” he said. “The students did not seem to have a large variety of repertoire of Western music, but their technical skill was excellent. They were very interested in learning how to play with expression and interpretation, and to learn about the broader musical context of the pieces in their repertoire.”
Worthen presented lectures, speaking through an interpreter, and taught master classes as well. The master classes numbered approximately 50 students, with six playing and the remainder watching and listening. The translator for the master classes didn’t speak English, so Worthen spoke in German, a language the translator did know. In spite of the language barrier, though, Worthen said communication was not a problem.
“It’s amazing how much we were able to communicate through the music,” he said.
In addition to working with the repertoire the students knew, he also introduced them to some truly American music by bringing selections from composer Aaron Copeland. In true cultural exchange, the students taught him about traditional Chinese flute music.
Worthen also visited Switzerland this spring as part of the Lucerne Festival under the direction of international conducting star Bernard Haitink.
Next month Worthen travels to Santa Fe for the Kammermusik Workshops as a coach for the chamber music program.
“Being a musician can be a pretty remarkable career,” Worthen said.