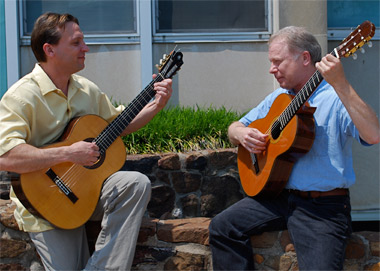 Seminar Veterans -- Gregg Goodhart, left, and Randy Pobanz are SIUC Guitar Seminar veterans. Goodhart comes all the way from California to participate each summer, a tradition for him since 1989. Pobanz has attended 28 of the 30 seminars. Both are SIUC alumni, and both teach classical guitar now, Goodhart at Servite High School in Anaheim, and Pobanz at Augustana College and Knox College. (Photo by Andrea Hahn) Download Photo Here

CARBONDALE, Ill. -- This summer marks the 30th anniversary of Joseph Breznikar's summer guitar seminar at Southern Illinois University Carbondale. While each seminar attracts new musicians, some of the familiar faces have appeared at almost every seminar since Breznikar began them in 1981.

A traditional part of the guitar seminar is the seminar concert, offered as part of the Southern Illinois Music Festival. The free performance begins at 7:30 p.m. on Thursday, June 9, at the Old Baptist Foundation Recital Hall.

Randy Pobanz, currently guitar instructor at Augustana College in Rock Island and at Knox College in Galesburg, has been to 28 of the 30 seminars. He missed once when his son graduated from high school, he said, and the other time he missed the seminar was so long ago he can’t even remember.

Gregg Goodhart, currently making his home in Los Angeles and heading up the music program for Servite High School of Anaheim, has been returning to Carbondale every year for the guitar seminar since 1989.

Both musicians earned their bachelor’s and their master’s degrees from SIUC’s School of Music. They came to the guitar program with different musical backgrounds, but they both found the same thing in the School of Music -- classical guitar changed their lives, and Breznikar, professor of guitar, was part of that change.

“Everything I learned about accomplishing a goal I learned from music, from classical guitar,” Goodhart said. “It has given me everything I have, and I teach my students now that music is a metaphor for life.”

Goodhart said he came to SIUC a bit adrift. He wasn’t sure what he wanted to major in, and didn’t know what he wanted from life. He played guitar, but he couldn’t read music and he couldn’t imagine himself majoring in it. That first guitar class he took was meant to be an experiment, something he’d try once. The second class, well, that was less of an experiment, more of the first steps down a path to a career and a life and a passion.

“One of the greatest things about this program, the School of Music at SIUC generally, is that the expertise of the faculty is as high (as at some of the best programs in the country) but you don’t have to audition at that level to get in,” Goodhart said. “They’ll take you as a beginner and work with you.”

Pobanz came to SIUC intending a career in music, but he was thinking in terms of music education. When he first came to SIUC, the University was the only state school in Illinois with a guitar program. Though Pobanz was plenty familiar with guitar, he’d focused more on bass and styles other than classical guitar, such as jazz, rock and blues. A friend introduced him to classical guitar via a recording made by Spain’s famous Andrés Segovia (1893-1987) and Pobanz found his true calling.

“I go to other guitar seminars, too, sometimes, but I keep coming back to this one because I always hear such a range of music, from different time periods, from the Renaissance to contemporary,” Pobanz said.

He added that his students benefit from the seminar as well, as he returns inspired, full of good ideas about teaching methods learned from Breznikar and often with a new musical selection to learn and then to teach to his students.

Breznikar brings an infectious passion for classical guitar to his seminar. He uses a master class format, working with each student individually but in a group setting. When he finds an element in one student’s progress that is applicable to all, he uses the opportunity for a group lesson.

“These students come here and they work really hard,” he said, adding that classical guitar demands an excellent command of technique. As he works with students, that is much evident as he suggests minute adjustments. The passion and the joy are much evident, too, as he encourages depth of emotional expression, variety of selections and soulful interpretation of the music on the page.

Breznikar, besides teaching and passing along his passion for classical guitar, is also a performer, composer and recording artist. His performance venues include the John F. Kennedy Center for the Performing Arts, the White House, Yale University and other venues in South America, Europe and Asia. His CD “Cascade: A Rhapsody for Guitar and Chamber Orchestra,” features his own eclectic classical compositions. His CD “George Harrison Remembered: A Touch of Class,” features Harrison’s music, both from his time with the Beatles and as a solo artist, classicized.

For more information about the SIUC School of Music, visit http://music.siuc.edu/. 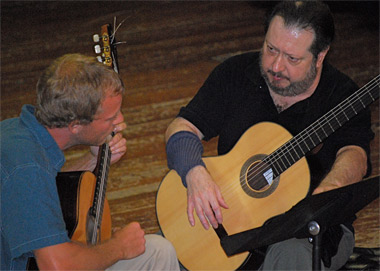 30th Anniversary of the School of Music's Guitar Seminar -- Joseph Breznikar,
right, professor of guitar at Southern Illinois University Carbondale, has
offered a week-long, intensive guitar seminar every summer for the past
30 years. Here he works through a trouble spot with Joe Palermo of Danville,
an SIUC guitar student taking the seminar this summer.
(Photo by Andrea Hahn) Download Photo Here