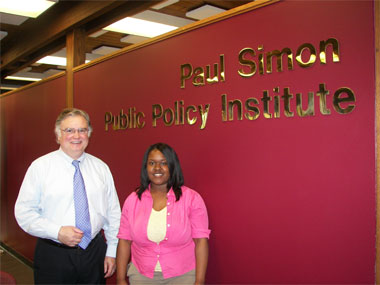 Mike Lawrence Scholar -- Valonda Roberts, a graduating senior in political science and sociology at Southern Illinois University Carbondale, is the 2011 recipient of the Mike Lawrence Scholarship. Roberts began volunteering at the Institute in fall 2009, and became a part-time student worker in January. Roberts is from Chicago. With Roberts is David Yepsen, Institute director. (Photo provided) Download Photo Here

CARBONDALE, Ill. -- An outstanding student who works with Paul Simon Public Policy Institute at Southern Illinois University Carbondale is the recipient of the 2011 Mike Lawrence Scholarship.

Valonda Roberts, a graduating senior from Chicago, received the scholarship at a ceremony on April 26. Roberts, the daughter of Constance and Victor Roberts, earned bachelor’s degrees in political science and sociology during May 13 commencement ceremonies for the College of Liberal Arts.

The award honors Lawrence, who retired as Institute director in November 2008. The veteran newsman, press secretary and political analyst joined the Institute in 1997 as associate director, and became director in 2004 following the death of founder and former U.S. Sen. Paul Simon. Scholarship candidates are students involved with the Institute and active in the University community.

“Valonda was a delight to have in the office,” said David Yepsen, Institute director. “ She was prompt, well-organized and very hard working. She beat most of the staff into the office many mornings and made a real contribution to the day-to-day operations of the Institute.”

Roberts began volunteering at the Institute after transferring from Lake Forest College in fall 2009. She became a part-time student worker at the Institute in January, and was active in coordinating last month’s Youth Government Day in Springfield.

Roberts plans to continue her education at the University of Illinois Springfield and work as a public affairs intern with the Illinois Department of Corrections.

Born and raised in the North Lawndale area on the west side of Chicago, Roberts credits her parents with her success.

“Things have not always been that easy for them but they have raised some beautiful children,” she said.

The experience gained working at the Institute is invaluable, said Roberts, who was introduced to the Institute through a friend and classmate her first semester at SIUC. The $750 award eliminated Roberts’ unsubsidized loans and helped reduce her subsidized loans, which means a great deal, she said.

“Ever since I started working and becoming more involved at the Institute I have met so many important and extraordinary individuals,” she said. “It has meant a lot to me and I would have no problem giving back to the Institute one day when I am able to do so.”

Scholarship guidelines state that the recipients can be either graduate or undergraduate students who are involved in a substantial number of Institute programs, initiatives and other Institute-related volunteer opportunities, and who have demonstrated positive leadership qualities. Other factors, such as service to other parts of campus or community, special challenges overcome by the students or financial need may be considered.

There is a preference that recipients are active in the Institute’s Student Ambassador Program and that they are African American.

Contributions are accepted online at www.paulsimoninstitute.org, by sending a check to the Institute at 1231 Lincoln Drive, Mailcode 4429, Southern Illinois University, Carbondale, IL 62901. More information on the scholarships is available by contacting Matt Baughman, Institute associate director, at 618/453-4011, or by email at baughman@siu.edu.