Love of science will lead senior to medical school 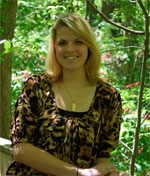 CARBONDALE, Ill. -- She’s following a similar career path as both her parents, but Elizabeth “Beth” Nielsen, a Southern Illinois University Carbondale physiology major from Bloomington-Normal, insists her decision to follow her passion for science to medical school is very much an independent choice.

Nielsen graduates from the SIUC College of Science on May 14. Her immediate plans are to remain in Carbondale until mid-summer, and then to prepare for life as a medical student at the University of Medicine and Health Sciences -- St. Kitts.

That’s St. Kitts, the island in the Caribbean Sea.

“I feel very privileged,” Nielsen said, acknowledging that living in an island paradise frequented by cruise ships is probably not generally seen as a hardship. “I’m excited about it.”

Nielsen explained that her parents, Dr. Thomas Nielsen and Dr. Kathryn Bohn, met while they were students in the SIU School of Medicine, then went on to work together as emergency room doctors for 26 years. Now, her mother is a vein specialist and her father is preparing to follow his wife into that specialty.

“They joke that I should specialize in veins, too,” she said, noting that she and her family are very close. Still, she said, her decision to apply for medical school really had nothing to do with her parents’ careers. It was a natural extension of her love of math and science, and the passion for the medical arts she discovered in a class taught by James Ferraro, an associate professor of physiology.

“I wasn’t sure what I wanted to do when I first came here,” Nielsen said. “Marching band was a big part of my life, probably the most important thing to me then, and the enthusiasm and energy of the marching band here is why I came to SIUC.”

Nielsen said participation in marching band shaped her as a person, teaching her the difficult-to-quantify skills that often make the difference between success and struggle for a student. For example, she said, the time management skills she learned in marching band -- and also in pep band -- helped her when she met the challenges of her first physiology class.

“I remember meeting with Dr. Ferraro and telling him I wanted to study physiology,” she said. “He asked me if was aware that physiology is one of the most demanding sciences -- it was pretty intimidating. When I took my second physiology class, I looked back at the first one and thought, ‘I thought that was hard? That’s nothing.’”

Nielsen got over being intimidated, and later worked with Ferraro on her honors thesis, “Trends in Age of Menarche,” a study in which Nielsen surveyed women in the area and analyzed the data to determine factors affecting the age a woman begins menstruation.

She said one of her most exciting experiences as an SIUC student was an Ancient Legacies trip to Egypt with SIUC philosophy professor Robert Hahn. Her parents came along, and even acted as tour docents when the group talked about Egyptian medical arts. Nielsen said she learned about the opportunity to visit Egypt and simultaneously learn about its ancient history with some hands-on activities in an honors philosophy class Hahn taught.

“That was a very different class for me,” she said. “But I’m glad I took it because it opened my mind up to thinking about science in a different way than I might have otherwise.”

Nielsen is a University Honors student, treasurer of the Pre-Health Professions, a Registered Student Organization, and a student worker in the Medical Resource Center. She is also treasurer of the Beta Beta Beta honors society for biological sciences, and a member of Alpha Lambda Delta, Sigma Alpha Lambda and the Golden Key International Honor Society. She found time to volunteer for Relay for Life and the Carbondale Boys and Girls Club.