Commencement ceremonies set for May 13-14

Commencement ceremonies are open to the public, and tickets are not required.

Commencement speakers include a justice with the Missouri Supreme Court; a professor and dean emeritus in forest resources at Mississippi State University; a professor emeritus in political science from the University of Massachusetts-Amherst; a senior attorney with The Boeing Company; a president and chief executive officer of TheBANK of Edwardsville; and the president and CEO of the Illinois Broadcasters Association. In most instances the commencement speakers provided their own biographies.

Nine alumni will receive Alumni Achievement Awards as part of individual and school ceremonies. The award is the highest honor presented by the SIU Alumni Association.

In addition, Carbondale businessman George Sheffer, owner and president of Murdale True Value, and William “Bill” Beck, of Mount Vernon, the CEO of Beck Bus Transportation, will each receive Distinguished Service Awards during the College of Business commencement. The award is in recognition of their service and devotion to their alma mater and Southern Illinois.

The ceremonies will be at Shryock Auditorium and the SIU Arena.

Jerome M. Mileur, a two-degree SIUC graduate and professor emeritus in political science at the University of Massachusetts-Amherst, will give the address and receive the Alumni Achievement Award.

Mileur, originally from Murphysboro, earned a bachelor’s degree in speech communication in 1955 and a doctorate in government in 1971, both from SIUC. Mileur also earned a master’s degree from the University of Illinois in 1958. Mileur, who retired from the University of Massachusetts-Amherst in 2004 after a 37-year teaching career, received the chancellor’s medal for distinguished service to that university in 1997.

Mileur is a member of the Board of Counselors for the Paul Simon Public Policy Institute. In 1995, he established the Morton-Kenney Public Affairs Lecture, a series that brings speakers to SIUC in the spring and fall each year. He established the series in honor of two of his political science professors -- Ward Morton and David Kenney -- who inspired Mileur as a student.

In 2008 Mileur donated his political memorabilia collection that covers presidential elections and politics from Andrew Jackson to George W. Bush -- close to 1,500 objects, including historic buttons and ribbons, and 135 framed works from political cartoons to posters, and other items, to the Paul Simon Public Policy Institute. He is also a former owner of the Harrisburg, Pa., Senators’ Class AA baseball team. Mileur lives in Hadley, Mass.

Nuruddin Farah, an internationally recognized Somali novelist, will be unable to attend to receive his honorary Doctorate of Humane Letters during commencement ceremonies, but hopes to attend the fall 2011 commencement in December, Dean Alan Vaux said.

Debra Braunling-McMorrow, a two-degree SIUC graduate, is vice president of business development and outcomes for NeuroRestorative, which specializes in providing rehabilitation to people with brain and spinal cord injuries. She will give the address and receive the Alumni Achievement Award.

Braunling-McMorrow earned a master’s degree in behavioral analysis and therapy in 1980, and her doctorate in guidance and educational psychology in 1986, both from SIUC. She received a bachelor’s degree in psychology from the University of Wisconsin at Eau Claire.

She is on the board of the North American Brain Injury Society, and in 2007 received the organization’s Clinical Service Award. Among her many affiliations, Braunling-McMorrow serves on the federal legislative action committee for the Brain Injury Association of America and is a surveyor for the Commission on Accreditation of Rehabilitation Facilities (CARF).

Thomas E. Holloway, president and chief executive officer of TheBANK of Edwardsville, will give the address and receive the Alumni Achievement Award.

A two-degree SIUC graduate, Holloway earned his bachelor’s degree in mathematics in 1972, and his Master’s of Business Administration in finance in 1974, both from SIUC. He is also a graduate of the Graduate School of Banking at the University of Wisconsin.

In his 37 years of banking, Holloway has been president with the First Granite City National Bank, Magna Bank, Union Planters Bank, and most recently, TheBANK of Edwardsville. TheBANK is a $1.5 billion locally owned community bank with 20 banking offices throughout Madison and St. Clair counties.

Holloway was a charter member of SIUC’s College of Business Hall of Fame in 1986. His involvement in many civic and charitable organizations includes the Illinois Chamber of Commerce, the Leadership Council of Southwestern Illinois, McKendree University, the St. Louis Regional Chamber and Growth Association, the Southern Illinois University Edwardsville Foundation and SIUE University Park. His work also includes chairing numerous community fundraising activities, including a capital campaign to build a new YMCA in Belleville raising a record $3.4 million.

Michael R. Peters, a former pilot who now is a self-employed entrepreneur with several web-based businesses, will give the address and receive the Alumni Achievement Award.

Peters earned his bachelor’s degree in aviation management and flight from SIUC in 1999. A first officer with ExpressJet from 2000 to 2010, Peters is founder of “aviationinterviews.com,” an Internet-based company that provides a place for pilots, flight attendants and dispatchers to share their interview experiences with others. The idea, born while Peters was a student at SIUC and working to get into the aviation industry, has grown from four Salukis sharing information to more than 40,000 aviation professionals over the last 10 years.

The website’s success enables Peters to donate some of the business proceeds to students in SIUC’s aviation program. Fifty-seven students received scholarships totaling $180,000 since 2003. Peters is also involved with several initiatives that benefit SIUC students and alumni, including establishing an SIUC aviation alumni page on the website, and helping start the “Hope Flys” Golf Scramble. The scramble honors Ryan McShane, a classmate of Peters’ and pilot at Delta Air Lines diagnosed with colon cancer. Scramble proceeds will go to establish a scholarship given in McShane’s name.

Peters is also a member of the SIUC Aviation Management and Flight Advisory Committee and the SIUC Captain’s Club fundraising group. Peters lives in Marengo.

John E. Gunter, dean and professor emeritus in the College of Forest Resources at Mississippi State University, will give the address and receive the Alumni Achievement Award.

Laurie K. Landgraf, senior counsel at The Boeing Company, will give the address and receive the Alumni Achievement Award.

Landgraf used the opportunity to earn a law degree from St. Louis University Law School in 1995, and began working in McDonnell Douglas’ law department in 1996. Boeing acquired McDonnell Douglas in 1997.

Landgraf’s practice focuses on intellectual property, and she provides legal advice to Boeing’s Defense, Space and Security business unit. She advises on a broad range of matters that involve contracts with the federal government, international customers and suppliers, mergers and acquisitions, patent, copyright and trade secret disputes.

Landgraf, a member of the SIUC Women in Engineering Council, lives in St. Louis.

Dennis Lyle, president and CEO of the Illinois Broadcasters Association, will give the address and receive the Alumni Achievement Award.

Lyle is a two-degree graduate of SIUC, earning a bachelor’s degree in broadcast management in 1975, and a master’s in telecommunications in 2000, both related to the radio-television program. Prior to joining the Illinois Broadcasters Association in 1999, Lyle and his wife, Paula, owned WCIL AM-FM. Lyle is a member of the College of Mass Communication and Media Arts’ Dean’s Industry Council.

In 2010, the U.S. Department of Justice honored Lyle with its national “AMBER Alert Broadcaster/Media Person of the Year Award.” Lyle is on advisory committees for the Illinois Emergency Management Agency’s Illinois Terrorism Task Force, and Illinois’ Amber Alert Task Force. He is also a member of the Broadcast Education Association board of directors.

Amy Goodman, acclaimed progressive broadcast journalist and investigator reporter, will receive an honorary Doctorate of Humane Discourse at the commencement ceremony. Goodman is host and executive producer of “Democracy Now!”

Jeffrey M. Kottkamp, a senior client audit partner-banking and securities with Deloitte, will give the address and receive the Alumni Achievement Award.

Kottkamp earned his bachelor’s degree in accounting from SIUC in 1983. A partner in the firm since 1994, Kottkamp has more than 27 years providing services to global financial services industry clients. He is currently the global lead client service partner for Morgan Stanley, one of the largest audit clients of the Deloitte global firm.

A member of the Board of Directors of Deloitte & Touche, LLP., Kottkamp was the regional managing partner in the firm’s Northeast Audit and Enterprise Risk Services practice, the largest audit region in the Deloitte US firm.

Judge Michael A. Wolff, a member of the Supreme Court of Missouri, will give the address, and Judge Leslie J. Gerbracht will receive the Alumni Achievement Award.

Wolff, a member of the Missouri Supreme Court since August 1998 following appointment by then-Gov. Mel Carnahan, was chief justice from July 1, 2005, to June 30, 2007. Wolff will leave the bench in August and return to St. Louis University School of Law as a professor and director of the Center for Interdisciplinary Study of Law and Advocacy. Wolff was on the faculty the St. Louis University law school for 23 years prior to his judicial appointment.

The Missouri Lawyers Weekly selected Wolff “Lawyer of the Year” in 2007. He is also currently chair of the Missouri Sentencing Advisory Commission.

A former newspaper reporter while in law school, Wolff graduated from Dartmouth College in 1967 and earned his law degree from the University of Minnesota Law School in 1970.

She began working for the Colorado State Public Defender’s Office after graduation. In 2005 she went into private practice, continuing to practice criminal defense while working as a mediator for the Colorado Office of Dispute Resolution.

Gerbracht graduated from Sangamon State University in Springfield, and worked for nine years with the Big Brothers Big Sisters program in Springfield prior to entering law school.

She lives in Trinidad, Colo.

Traditionally, there is no guest speaker for the program. Doctoral and master’s degree candidates from the various colleges will receive their degrees. 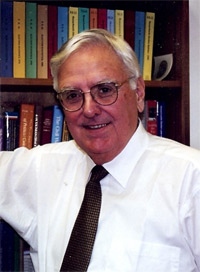 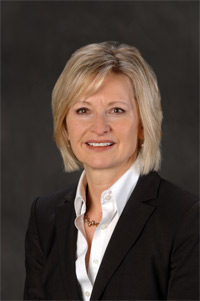 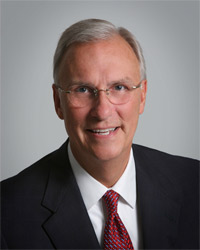 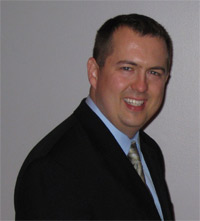 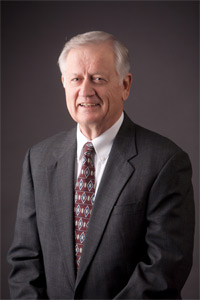 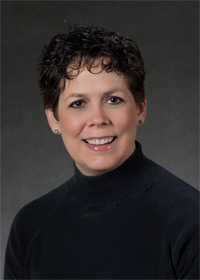 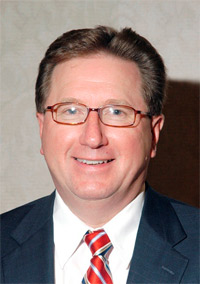 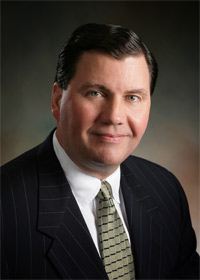 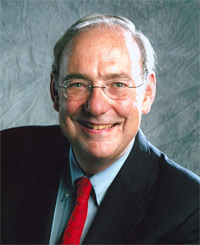 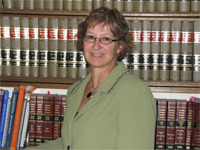