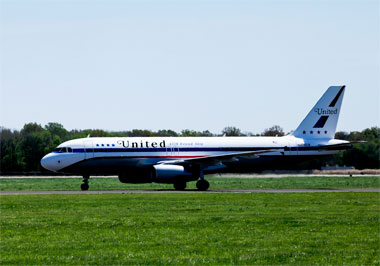 Memories, old and new -- With a replica livery that dates back to the late 1970s and early 1980s, this United Airlines A320 Airbus will likely bring back memories when it lands Saturday at Southern Illinois Airport. Approximately 116 high school students, mostly from the Chicago area, will tour the aviation facilities and campus at Southern Illinois University Carbondale during the 13th United Airlines-SIUC Aviation Career Day. (Photo provided) Download Photo Here

And for alumni who participate in the annual United Airlines-SIUC Aviation Career Day, the event offers a chance to not only show off their company, but also return to a program that helped guide their careers.

“I enjoy participating as a way to give back to the University that helped me obtain my dream of becoming a United Airlines pilot,” said Mike Lowe, a first officer with United Airlines who earned his degree in aviation management in 1995. “The things I learned and the friends I made at SIUC and the flying team (Flying Salukis) had a huge impact on me making it to United. I enjoy coming back and giving back to SIUC and hope to have even a small impact on the high school and college students.”

Reporters, photographers and camera crews are welcome to attend the event, participate in courtesy flights, and interview students, faculty and alumni. The plane will land at Southern Illinois Airport at about 8:45 a.m. For more information, contact David A. NewMyer at 618/453-8898.

The 138-seat, A320 Airbus from Chicago’s O’Hare International Airport will touch down at Southern Illinois Airport at about 8:45 a.m., Saturday, April 30. Capt. John Madden will pilot the plane during the 45-minute flight. In addition to the five-member crew, another 15 to 16 SIUC aviation program alumni who work for United Airlines or Continental Airlines will be aboard, said David A. NewMyer, chair of the Department of Aviation Management and Flight. The two airlines are currently integrating operations after a merger last fall.

United Airlines officials say that the A320 plane will carry a special paint scheme -- the airline’s old “Friend Ship” livery from the late 1970s and early 1980s.

Madden earned his degree in aviation management from SIUC in 1981. After a career in the U.S. Air Force, he joined United Airlines in 1990, and has been a captain for 13 years. He and Lowe have flown together numerous times. Madden flew as a co-pilot with Lowe’s father, Tom, who was with the airline for 34 years, including 13 as a captain.

SIUC is the only university that works with major airlines to fly students to its campus for an aviation career day event, NewMyer said. Alumni who come include pilots, dispatchers, mechanics, flight attendants, and others who used their education at SIUC to procure a career with United Airlines, Madden said.

“The day is a great opportunity for the students to interact with the alumni and hear their stories on how the alumni progressed from high school to SIUC and on to United Airlines,” Madden said. “It also provides students a clear path on how to secure a career in aviation.”

The aviation programs consist of aviation management, aviation flight, and aviation technologies, all within the College of Applied Sciences and Arts.

After arriving at Southern Illinois Airport, students will receive introductory flights and tour the aviation facilities. Students then come to campus for a presentation by SIUC aviation alumni who work for the airline and tour the campus. Current students in the aviation programs also participate and pair with the visiting students during the campus tour.

NewMyer said there is a possibility up to 118 students could attend, which will eclipse the previous career day high of 115 students. A majority of the students are from the Chicago area, although students from Missouri, Kentucky, and nearby Galatia will also participate.

Students who attend this year’s event will also see ongoing construction of the 230,000- square-foot Transportation Education Center. The facility, also at Southern Illinois Airport, will house the aviation and automotive programs. Completion is set for fall 2012, when current high school juniors will be college freshmen, NewMyer said.

Madden said he enjoys his trips to Carbondale each year. This year will be a bit different for him, however, as two of his children, Maggie and Jack, who attend Hinsdale Central High School, will be aboard the flight.

The career day not only benefits visiting students “who get to meet SIUC students and staff to see first-hand the excellent programs offered and the beauty of the campus,” but is also important for current aviation program students, Lowe said. Those students have a chance to ask questions about career expectations in addition to forming networks and contacts within their field, he said.

NewMyer said the career day is among his favorite aviation events, and that United Airlines is a major contributor to the program’s success. A majority of the students who enroll in the aviation flight and management programs are previous career day participants, he said. About eight to 10 percent of the students who participate in this unique recruiting event also enroll in the program, he said.

The alumni volunteer their time, and request the time off well in advance of the day, NewMyer said.

While many students on the flight will still be deciding their career path, Saturday will mark Evan Krueger’s last aviation career day as a high school student. Krueger, a senior at Prairie Ridge High School in Crystal Lake, will enroll in SIUC’s aviation flight program in the fall with a goal of becoming a commercial pilot.

Krueger has been to four aviation career days on campus, starting when he was a high school freshman. While Krueger did not initially plan to attend SIUC, being able to talk with faculty and current aviation students “had a huge impact” on his final decision, he said.

“After experiencing what the career days had to offer, I began to see more and more that this school catered to my interests and needs,” said Krueger, the son of Stephen and Christine Krueger.

“It’s a real treat to see the alumni’s passion for both aviation and how SIUC has helped them land a career there,” he said. “It inspires me and makes me hope to come out of school being as successful and as proud of my education as all of the volunteers are. Additionally, it’s reassuring to see graduates so successful in what they do. Everyone has great advice to offer and a different story on how they got where they are now.”

Starting with his initial experience with the Experimental Aviation Association’s Young Eagles program when he was 9 years old, Krueger said he has loved every second in a plane. His first flight lesson was in eighth grade; Krueger said he saved every penny he earned working at an ice rink beginning his freshman year, and flew solo three months after his 16th birthday.

With an “obsession to fly,” Krueger earned his private pilot’s license on his 17th birthday, which “to this day, still remains my greatest accomplishment,” he said. Krueger has his own blog, and a blog with the Aircraft Owners and Pilot’s Association “Let’s Go Flying” campaign, where he wants to inspire other students “to stay actively involved in aviation,” he said.

The itinerary for the day is: