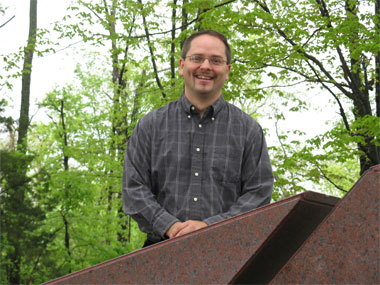 Job on campus/department you work in: Associate professor and program director for the Mortuary Science and Funeral Service Program in the School of Allied Health

How long at SIUC: Just finishing up my 11th year

Hometown: Carterville (I have been there for 16 years -- longer than any other place I have lived)

When you were a youngster, what did you want to be when you grew up? I knew from about 5 or 6 years old that I wanted to be a funeral director.

If you could choose another profession, what would it be and why? Race car driver -- I would love to drive fast -- legally.

What is something you still want to accomplish in life? Take a locksmith correspondence course.

People don’t know that you … were in the Army. Most people don’t believe it when I tell them, so I have stopped trying to convince them.

What was the first “album” you ever bought, and was it an LP, 8-track or CD? The Police, “Synchronicity,” on cassette tape

If you could pick an actor/actress to play you in a movie, who would you pick, and why? A young Robert DeNiro. He is an awesome actor.

What is one random fact about you? I collect Pez dispensers

What is your pet peeve? Bob Dylan-type people -- those who complain about things but never do anything to change the problem.

What would you like your gravestone to say about you? Was a good husband, dad and friend.