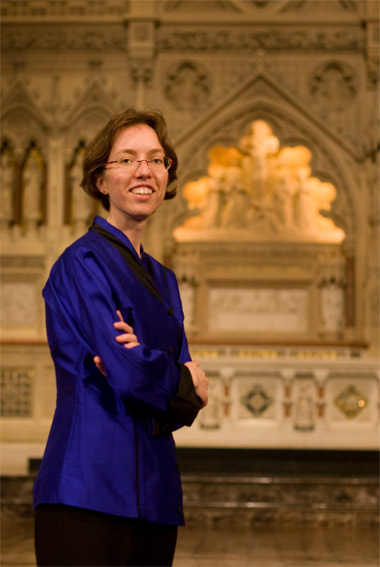 Acclaimed organist to perform at Shryock

CARBONDALE, Ill. -- The Chicago Tribune praises her "virtuosic fingers and feet" and other reviewers and critics are even more flowery in their admiration of Isabelle Demers, a musical guest at Southern Illinois University Carbondale this week.

Demers presents a free concert beginning at 7:30 p.m. on Friday, April 29, at Shryock Auditorium. The concert is part of the American Guild of Organists Artist Subscription Recital Series presented through the School of Music.

Demers is a past featured performer at national conventions for the American Guild of Organists (twice), the Royal Canadian College of Organists, and the joint convention of the American Institute of Organbuilders and the International Society of Organbuilders. Besides those and other performances here and abroad, Demers is also a recording artist. Her recent debut on the British label Acis garnered her both radio time and critical acclaim.

Demers began piano study at age 6 and organ at 11. Presently she is working on her doctoral degree at The Juilliard School, where she also earned her master’s degree. She also studied in Paris at the École Normale de Paris-Alfred Cortot, and at the Montréal Conservatory of Music.

The Southern Illinois chapter of the American Guild of Organists seeks to promote organ music, both contemporary and historical. These free concerts are part of that mission.