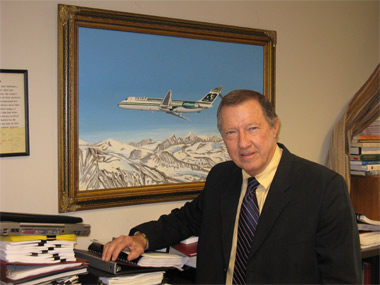 Simon faculty award recipient -- Robert W. Kaps is the 2011 recipient of the E.J. and Mary C. Simon Distinguished Faculty Award from the College of Applied Sciences and Arts at Southern Illinois University Carbondale. Kaps, a professor in the Department of Aviation Management and Flight, has more than 40 years in the aviation industry, including as an executive with Trans World Airlines and Ozark Airlines. (Photo by Pete Rosenbery) Download Photo Here

CARBONDALE, Ill. -- In his more than 40 years in the aviation industry, Robert W. Kaps has done a bit of everything, from being involved with airline labor negotiations to working with famous celebrities including Peter Sellers, Elizabeth Taylor, Richard Burton, Frank Sinatra and other members of famed "Rat Pack" during their travels.

Now, as a professor in Southern Illinois University Carbondale’s nationally recognized aviation management and flight program, it’s Kaps’ impact on students that draws attention and appreciation. Kaps is the 2011 recipient of the E.J. and Mary C. Simon Distinguished Faculty Award in SIUC’s College of Applied Sciences (CASA). E.J. Simon was dean of the college from its inception in 1951 until his retirement in 1970, and both he and his wife Mary C. Simon, remained strong supporters of the University and CASA. Simon died in 1989; his wife passed away in January at 95 years of age.

CASA faculty with tenure and at least seven years with the college are eligible for the award. The award was created to “acknowledge, celebrate and reward lifetime achievements with respect to teaching and other activities directly related to the education and general welfare of students,” according to the college’s award application criteria. Administrators within the college selected the winner.

Kaps will receive a $5,000 award and a brick with his name on the Ernest J. and Mary C. Simon Terrace, south of the CASA building overlooking campus lake.

“Dr. Kaps combines his early career experience in aviation management with his passion for teaching and scholarship to provide a unique classroom experience for students,” said Terry A. Owens, interim dean. “His personality creates a classroom environment that makes students feel comfortable and at ease while challenging them to think and learn. I believe Dr. Kaps epitomizes the technical/professional careers vision of the college established by the founding dean, Dr. Ernest Simon, and the passion for teaching and scholarship that Mary Simon supported by establishing the Ernest J. and Mary C. Simon Distinguished Faculty Award.”

A former executive with Trans World Airlines and later Ozark Airlines, Kaps began his SIUC career in 1981 teaching an off-campus course focusing on airline labor relations. He came to the Carbondale campus in 1991, and teaches undergraduate courses in labor relations and finance and graduate-level courses in international aviation and airport administration.

Kaps and his wife, Donna, live in St. Louis, and have three grown daughters.

Kaps said he’s honored to receive the award, and said his goal is to keep students inspired. Known for his spontaneity, Kaps dislikes lectures and favors open discussions with students. He will climb atop a desk or break into an old soft shoe routine in an effort to help students better understand the critical issues that involve airline management. It’s important to bring real-world experiences into the classroom, and “sometimes you have to do different things to get them to understand it,” he said.

“In my teaching I do anything I can to get them to the point where they are wanting to learn,” he said. “That is the key. Some of the things I do are relatively stupid, but sometimes they work.”

But it is also important for students to know their instructors have their best interest at heart and want them to learn, Kaps said. Having concern for students, society in general, and what is happening in the nation is important, said Kaps, who doesn’t teach his personal philosophy and emphasizes classroom discussions.

Former students also note Kaps’ passion, pride and commitment to teaching. Douglas Carr, vice president for safety, security and regulation for the National Business Aviation Association and an SIUC aviation management and flight graduate, wrote that Kaps’ courses were a topic of conversation beyond the classroom when Carr was a freshman. And Kaps’ teaching left an indelible mark, Carr wrote.

“These stories helped to prepare me for my two classes with Dr. Kaps,” Carr wrote. “Perhaps more importantly, Dr. Kaps himself formed the indelible fabric of the aviation community at SIUC through his work with, and support of, students and student activities. Dr. Kaps’ positive influence on so many students … is one of the many reasons for SIUC’s stellar industry reputation.”

Kaps has been teacher of the year within the department five times and teacher of the year for the College of Applied Sciences and Arts once. In 2008, Kaps received the William A. Wheatley Award for Excellence in Education from the University Aviation Association for his contributions to aerospace education.

Kaps said it is important for students who want to be pilots to realize the need to understand the entire package within aviation.

“Most of our kids want to be pilots and that’s great because we need good pilots, there is no doubt about that,” he said. “The United States is getting to a point where we don’t have enough pilots and that is coming very quickly. But the rules of the game have changed -- just to fly a plane no longer is the totality of what a pilot needs to be.

Kaps began with TWA in the late 1960s through an aviation management-training program upon earning his undergraduate degree in marketing from Washington University in St. Louis. During his 14 years in various operations positions with TWA, Kaps rose to become the airline’s director of personnel. In 1978, Kaps went to Ozark Airlines, where he became staff vice president of industrial relations and chief negotiator.

Kaps has master’s degrees in industrial relations and legal studies from Webster University in St. Louis, and he earned a doctorate in workforce education from SIUC in 1996.

In addition to his research work, Kaps is the author of two textbooks, “Air Transport and Labor Relations,” and “Fiscal Aspects of Aviation Management.” The textbooks are “key textbooks in their respective areas” for aviation management programs, said David A. NewMyer, department chair. A third book, “An Aviation Desktop Reference,” is due by the end of the year.

In addition to working with students, NewMyer notes Kaps has been a college-level mentor virtually every year the college has hired new faculty since 1997, mentoring new hire, tenure-track faculty in CASA departments outside of aviation management and flight.

NewMyer also notes Kaps has been heavily involved with establishing the Ryan McShane Hope Flys Golf Scramble -- the inaugural event was in November. The event is for one of Kaps’ former students, Ryan McShane, a Delta Air Lines pilot who contracted a rare form of cancer. The event raised more than $10,000 and culminated in the award of a scholarship and establishment of an endowment fund with the SIU Foundation.

Kaps “exemplifies what the Simon Award intends to recognize regarding extraordinary lifetime achievement with respect to teaching and other activities related to the education and general welfare of the students in the College of Applied Sciences and Arts,” NewMyer wrote.