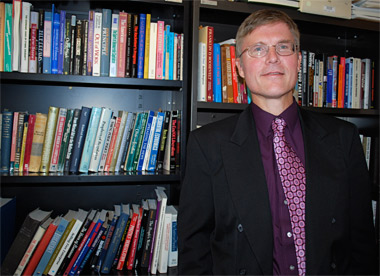 Job on campus/department you work in: Professor of history

When you were a youngster, what did you want to be when you grew up? Rock star (“money for nothing and… I want my MTV!”). Muckraking journalist.

People don’t know that you … Worked in a high-end stereo salon. Do such things even exist today with the low-fi sound of iTunes?

If you could choose another profession, what would it be and why? Back to my old career in finance. I loved the challenge of helping people improve their finances and avoid the mistakes so many do. But old myths die hard -- like “homes are a good investment.” But that’s the focus of my current research: who saw the bubble and who didn’t -- and why?

What was the first “album” you ever bought, and was it an LP, 8-track or CD? LP, Sgt. Pepper’s Lonely Hearts Club Band (on its 10th anniversary)

If you could pick an actor/actress to play you in a movie, who would you pick and why? Denzel Washington. Nice guy, focused, easy smile and gets the job done.

What is one random fact about you? I spent the summer of 1984 running across Europe -- the free part, at least.

Cats or dogs? Cats. They are self-cleaning.

What is your favorite food and why? Pizza. Even I can cook it -- just right.

Who has inspired you, and how? My first history professor -- he changed me from journalism to history with his spectacular Socratic teaching method of the “Great Books.” My Russian professor was a close second: she fled the communists, got sent to Nazi labor camps and eventually made it to the U.S.A. She woke me up to the reality of totalitarianism and the evils of communism when “smart people” didn’t say such things about the Soviets.

What is your pet peeve? Slow drivers in the passing lane.