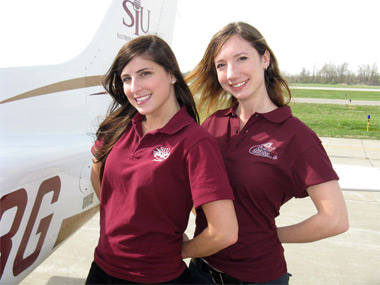 CARBONDALE, Ill. -- A fund-raising event next week will assist a team from Southern Illinois University Carbondale’s Aviation Management and Flight program as it prepares for the 2011 Air Race Classic.

Flight instructors Erin Jackson and Melanie Murdock will compete in June in the 35th annual event, which celebrates the history of women in aviation.

From 5 to 8 p.m., Tuesday, April 12, a portion of proceeds from meals at Tres Hombres, 119 N. Washington, St., Carbondale, will go toward team expenses. The event includes several raffles, including a “Discovery Flight” for two. Other raffle items include SIUC aviation merchandise, and Cracker Barrel and Arnold’s Market gift certificates.

The team’s expenses are estimated at least at $5,000 for the competition, which includes entry fee, fuel requirements with rapidly rising fuel costs, lodging expenses and food, in addition to pre-race and post-race activities. The University is responsible for the Cessna Skyhawk 172R plane and maintenance.

This is the second year that SIUC will have an entry in the event. In 2010 there were three SIUC teams. Jackson and Christine Zoerlein comprised the highest-finishing SIUC team, placing ninth of 53 teams overall and third in the collegiate division.

David A. NewMyer, chair of the Department of Aviation Management and Flight, said he is proud the aviation program is again able to compete. Last year was the 100th anniversary of licensed female pilots. Famous aviator Amelia Earhart was one of 20 women to compete in the first Women’s Air Derby in 1929.

“We want to continue our involvement in the event because we want to celebrate the growing role that women play in aviation,” NewMyer said.

“This is a great way to show off the University and the aviation program,” NewMyer said.

Jackson, a senior lecturer, is looking forward to competing again this year.

“I’m really excited to apply what I learned last year and hopefully bring home the collegiate trophy,” she said.

There are currently 39 teams in the field, including seven collegiate teams, but by race time last year there were more than 50 teams. The entry deadline is April 15.

While the route is different and will present different challenges than a year ago, Jackson said the familiarity from competing last year is a benefit. Understanding better how to fly the race and knowing what worked a year ago is helping to prepare for this year, she said.

Another special part of the competition was meeting amazing women from all walks of life who compete. The opportunity to “meet these strong women,” many of whom faced opposition and challenges when learning to fly, and hearing their stories is beneficial, Jackson said.

Jackson said she is also excited that Murdock is competing this year, which opens up the opportunity for another female pilot to experience the competition.

Jackson was one of Murdock’s instructors a year ago, and Murdock recalls the stories Jackson told of the event last year.

“I’m excited about applying what I’ve learned in the past four years to actual experiences and use all the knowledge we have to beat people and score well,” Murdock said.

Donations are also acceptable, with checks payable to the SIU Foundation. For more information, contact Kathy Lloyd at 618/453-9226, or by email at airrace@aviation.siu.edu.