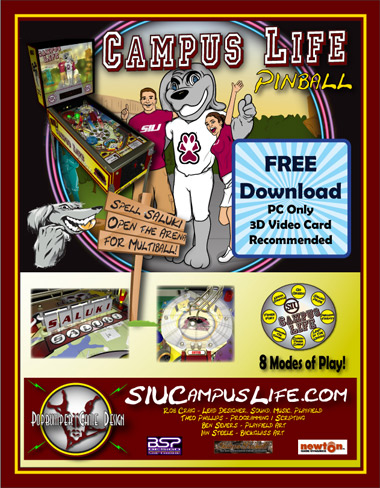 CARBONDALE, Ill. -- Can't get enough of being a Saluki even when you are at your computer?

The free game, “SIU Campus Life Pinball,” focuses on the great experiences and memories of SIUC, and features more than 100 custom sound effects that include music by the Marching Salukis, “Go Southern Go!”, the Pulliam Clock tower, custom recordings of Saluki cheerleaders, and commentary by Steve Falat, the public address announcer at Saluki games.

The game will be available for anyone to download and install on their personal PCs during the GaMeRS meeting from 2 to 5 p.m. today (April 1) in the College of Applied Sciences and Arts building, room 204B. There will also be several computers available for those interested in trying out the game.

The game will be available for a free public release on Saturday, April 2, at www.SIUCampusLife.com. The download is free, and available for installation on PCs only, with recommendations to use 3D video cards. The game is suitable for children of all ages.

The project is part of Craig’s final requirements to earn a master of science degree in Professional Media and Media Management Studies from the College of Mass Communication and Media Arts. He will graduate in May.

Craig, who is from Marion, works at SIUC as a computer information specialist in the School of Information Systems and Applied Technologies in the College of Applied Sciences and Arts. He is also adviser for Game Mechanics and Research Studio, or GaMeRS, a registered student organization that promotes research and development of video games.

Craig began working on the project in January, and recruited students and alumni to be involved in art and programming of the full-featured pinball simulation. Craig’s educational track is with new media, and he wanted to focus on the video game industry, including how to create, produce and market a video game.

Paul Torre, an assistant professor in Radio-Television, chairs the committee for Craig’s research report. The project is different than a final written thesis or documentary film, and looks at the way in which a pinball game can be a marketing tool for the University, he said.

The project is “really on the cutting edge of media production,” and appropriate for the College of Mass Communication and Media Arts. The graduate program is designed to be flexible, Torre said.

There are a number of students who are interested in different kinds of media production in new and emerging media. Students can produce content for gaming, Internet and mobile devices and analyze a wide variety of media business methods and models, Torre said.

“He knocked himself out spending far more time I think practically than many would in writing and researching a paper,” Torre said.

“What’s really unique about this research report is that he is creating a free-standing, fully functioning, really interesting and creative video game … drawing from the history of SIUC and what’s attractive about SIUC,” Torre said.

Torre, who teaches classes about gaming and other media businesses, notes that Craig is targeting a specific audience.

“This is the kind of game you can see students really being interested in,” he said. “It’s widely available for free, and he is taking advantage of all the new technologies and distribution. He’s using a lot of new technologies in its creation.”

Craig said one of the things that attracted him to the Professional Media and Media Management Studies program is that it recognizes video games as a form of media, in addition to the more traditional forms including radio, film, television, and the Internet. Students want to know more about the video game industry, and he would like to see a minor available in video game design and industry, Craig said.

Craig acknowledges that he put in hundreds of hours on the project. He is particularly fond of a mode within the game where players open the SIU Arena to earn two additional balls on the game playfield. Craig said he hopes students and alumni enjoy the game and are able to connect to memories of the University. Potential new students will soon become familiar with areas in the machine titled “Woody Hall,” “Morris Library,” and Faner Hall” once they arrive on campus.

Craig said he polled a group of current SIUC students including freshmen, transfer students, upperclassmen, graduate students, and a number of alumni in helping shape the concept for the game.

“One of the things I hope that people take away from this is that it can be done,” Craig said. “You can develop a game from nothing into a very nice complete package.”