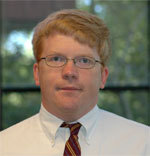 CARBONDALE, Ill. -- A mathematics faculty member at Southern Illinois University Carbondale will travel to India as a Fulbright Scholar later this year.

Wesley Calvert, assistant professor in the Department of Mathematics in the College of Science, recently received word that the Fulbright Foundation had approved his application for the award, which will fund his work. As part of that research, Calvert will spend about six months in Chennai, India, July through December, studying mathematical logic with Indian colleagues at several nearby institutes.

A native of Carterville, where he graduated from high school in 1996, Calvert focuses on mathematical logic and its applications, especially in the theory of computing area. Among other things, his work involves “figuring out how to program the computers that we will have 50 years from now,” he said.

“Computers do what is essentially mechanical reasoning,” said Calvert, who earned his doctorate at the University of Notre Dame in 2005. “Logic is a very formal way of coding reasoning and the mathematical formalities behind computing can be matched with classical logic, like you’d find in Aristotle, very closely.”

Calvert, who joined the SIUC faculty ranks last fall, said the “logic” behind the Fulbright project has to do with opening communications as much as mathematics. Indian logicians have been working as long as any, he said. In recent years, however, trends in India have become similar to those among U.S. logicians. In Calvert’s view, there is an important opportunity for collaboration.

“They’ve been starting to do some of the same things we’re doing,” he said. “Math has trends, and these trends can take on local features. One of the big issues is having everyone know what the trends are in various places.”

While in Chennai with his family accompanying him, Calvert will work with other theorists from nearby institutes such as The Chennai Mathematical Institute, the Institute for Mathematical Sciences and the Indian Institute of Technology Madras. Along with giving lectures to update his Indian hosts on trends in U.S. logic theory, Calvert said he likely will spend a great deal of time working out theories in the traditional way.

“If you were to see such work, you most likely would see a group of people staring at a chalk board with some mathematical problem drawn out, stroking their chins and thinking,” he said. “After a while, one might start to say, ‘what if we…no that wouldn’t work,’ and so on. We toss ideas around.

“Eventually, someone has an idea for solving part of the problem, and you build from there,” he said. “It’s a very collaborative process when done right.”

Along with logic, Calvert also specializes in working with K-12 mathematics educators at home. For instance, he currently is involved in a professional development project through the Monroe-Randolph Office of the Regional Superintendent that is providing professional development for teachers in Sparta, Red Bud, and Prairie du Rocher. Calvert said he likely would participate in similar efforts with local primary and secondary schoolteachers in India.

Receiving the Fulbright Scholar Award will allow him to conduct research that he otherwise might not be able to do, Calvert said, by putting him touch with colleagues engaged in similar work. “This kind of communication is the stuff mathematics research is made of,” he said. “The hope is that it will lead to establishing a few additional lines of work.”

“India has far more qualified students than it has seats available in its universities,” he said.