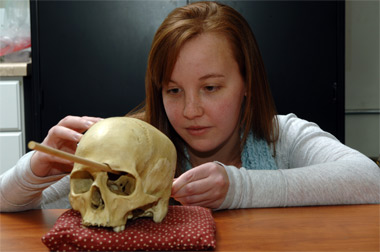 Forensic anthropologist gets to the bare bones

CARBONDALE, Ill. -- Southern Illinois University Carbondale anthropologist Gretchen R. Dabbs, a specialist in forensic anthropology and bioarchaeolgy, has many times been called upon to use her expertise to help solve mysteries -- but she’d prefer there be less mystery about what she, and other forensic anthropologists, do, and how they do it.

Television shows such as “Bones” and “CSI” have raised interest in her specialized area of study. However, these shows and others like them have also raised expectations of what a forensic anthropologist can do that go well beyond reality.

Forensic anthropology, by general definition, is the application of physical anthropology and human osteology, or the study of the human skeleton, in a legal context, most often in matters of criminal investigation.

“People say they know that what is represented on television is not necessarily true,” she said. “And yet, they still really do expect a forensic anthropologist to produce the kinds of results they see on a TV show. There is still a lot of mystery about what we can do and can’t do.”

As part of her effort to help clear up some of that mystery, Dabbs, herself a veteran of more than 50 law enforcement cases requiring forensic anthropology expertise, offers training sessions for area law enforcement officers.

“Mostly, we want (area law enforcement) to know what forensic anthropologists can do,” she said. “From bones, we can estimate the sex, age range, ancestry, past injuries, limited disease history and sometimes comment on the potential cause of death.”

In one law enforcement case, for example, before Dabbs came to Southern Illinois, she helped police establish that the bone fragments found at the home of an elderly woman did, in fact, belong to the woman herself.

“She lived alone, and she had 14 dogs who lived with her,” Dabbs said. “They called us in to examine the bone fragments they found in the house and yard. We were able to establish sex and age range. That and other evidence satisfied law enforcement that the homeowner had died and the remains found were hers -- that it wasn’t a situation where there was an unidentified body and a missing person.”

In another case, police asked Dabbs to help identify a bone a dog in a rural area had carried into its yard. Dabbs identified the bone as human, and eventually was able to help law enforcement officers discover and identify the remains of an older woman who had gone hunting in a secluded area and had died from natural causes.

Dabbs has also worked with law enforcement to help establish identities after fatal fires where the remains are badly burned and charred bones.

“It takes a certain person to be able to study forensic anthropology,” Dabbs admitted.

Of particular interest, she said, is research specific to how the unique geography and environment of Southern Illinois affect decomposition. For that reason, she, and D.C. Martin, a graduate student from New York, N.Y., established the SIUC Complex for Forensic Anthropology Research (CFAR), or, a place to study what happens to a body after death.

At the present time, CFAR is using only pig carcasses from animals that have died natural deaths. Pigs bear enough structural similarity to humans to make them a reasonable and widely accepted research substitute. In the future, however, the forensic anthropologists here would like to expand their research program to include the study of human remains as well.

Dabbs’ individual research projects include assessing the difference in environment temperature data collected at recovery sites, compared to data collected from the nearest National Weather Service station. This is significant because NWS data has traditionally been used to calculate estimates of the post-mortem interval (or, how long since an individual has died).

“Some of my previous research has shown that there are some significant differences between site specific data, and that collected at NWS stations,” Dabbs explained. “I am investigating what that difference is, and if there is a way we can adjust the NWS data for specific sties to make it a better model of the actual environment at a recovery site.”

Martin’s research includes studies of how bodies decompose when encased in cement.

“I’ll watch a show like ‘CSI’ or ‘Bones’ and then I’ll test the science as it relates to forensic anthropology,” he said. “It’s important that the research be reliable and clear, not just for its own sake but also because, when we’re applying research to a criminal justice case, people’s lives can be significantly altered by the interpretation of evidence.”

“If people sitting on juries expect certain kinds of conclusions from forensic anthropology that aren’t realistic, that can affect the outcome of a criminal case. It’s important for people to have a better understanding of what is fact and what is fiction.”

Students in Dabbs’ forensic anthropology class work with actual bones from SIUC’s collection, and with realistic models. They learn techniques such as determining sex from pelvic bones, age from bone development or wear, race from cranial and facial measurements, and other techniques common to bioarchaeology and forensic anthropology.

The forensic science minor at SIUC is the only such program in the state of Illinois. To reach Gretchen Dabbs, email her at gdabbs@siu.edu or call her at 618/453-3298. 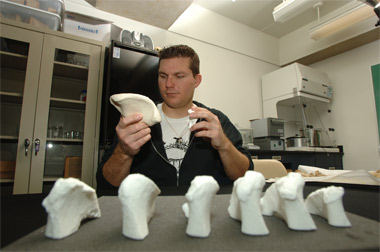 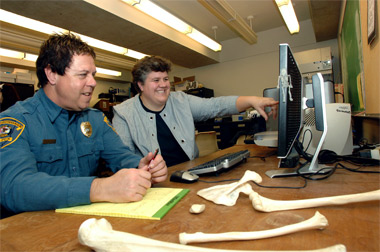