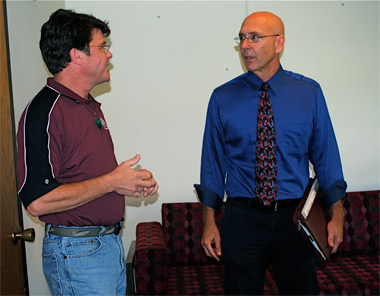 Job on campus/department you work in: Co-director of Saluki First Year and faculty member in the Department of English

How long at SIUC: Just began 12th year (gotta round out the dozen)

Hometown: Spent my wonder years in Miami, Fla., but before that, outside Chicago and outside New York City

When you were a youngster, what did you want to be when you grew up? I was raised Catholic, second son, so I wanted to be a priest (a goal that did not survive my discovery of girls).

People don’t know that you … Are innately shy.

If you could choose another profession, what would it be and why? I’d upgrade my homebrewing avocation into a full-time gig -- it’s an enjoyable, social activity (and makes figuring out what to give as Christmas presents rather easy). Either that, or epic storytelling for children.

If you could pick an actor/actress to play you in a movie, who would you pick and why? I am told that Bruce Willis is an obvious choice, so I’ll go with that.

What is one random fact about you? I had my first ‘child’ as a teen-ager, a wooly monkey, complete with weaning, diapers and first steps.

Cats or dogs? Dogs, absolutely dogs (though I’m told there are four cats in my house, as well as a bird and a snake).

What is your favorite food and why? Indian food: spicy but delicately nuanced at the same time.

Who has inspired you, and how? I am inspired by those whose response to having their deeply held beliefs challenged was first to give those beliefs serious reconsideration, and then to stand up and defend them.

What is your pet peeve? People who are not good to their word disappoint me greatly.