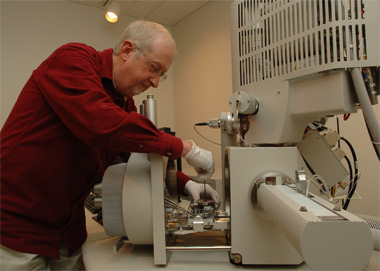 CARBONDALE, Ill -- Researchers at Southern Illinois University Carbondale have a new tool at their disposal that can make the tiniest structures visually pop like the latest 3-D movie image.

The new device, an analytical high-resolution scanning electron microscope, will help researchers see more clearly structures only a few nanometers in size. It also will help them identify what the structures are made of as well as take measurements and make movies of processes that happen at the nanoscale level.

The new device also comes with software that makes it much simpler to turn simple 2-D images into bright, vibrant 3-D images -- a capability that will have some of SIUC’s top researchers wearing the classic cardboard glasses at times while they work.

The new device joins three other electron microscopes located at the University’s Integrated Microscopy and Graphics Expertise center, a specially designed building near the center of campus that houses some of the most high-tech equipment at SIUC. John Bozzola, director of the IMAGE center, said the new machine offers huge advantages in terms of resolution, image quality and flexibility.

“It’s a pretty sharp piece of equipment,” Bozzola said. “The advantage of this instrument compared to the others here is it has much higher resolution. It goes down to 1 nanometer, which is a very high resolution and it gives really bright images. With our older equipment, you had to speculate what you were looking at since the images were dim and unsharp. It took a lot of skill and educated deduction. But now, with this machine, there’s no doubt what you’re looking at.”

A grant from the National Science Foundation paid the $464,075 price tag for the new device. Besides Bozzola, SIUC faculty members and researchers Punit Kohli, Samir M. Aouadi and Peter Filip, along with former faculty member Shing-Chung “Max” Yen, wrote the proposal, which was funded by the American Recovery and Reinvestment Act.

Filip, director of the SIUC Center for Advanced Friction Studies, said the new equipment is crucial to the center’s work.

“We will use it to work with students on advanced friction materials, such as brake materials,” Filip said. “We’ll also use it in specialized projects, such as our work with Formula 1 racing, as well as the military and the U.S. Navy.

“It’s crucial because it is a higher speed and has better precision and accuracy,” Filip said. “It will basically helps us do better research.”

Scanning electron microscopes can go far beyond even the very best optical microscopes, using some of the basic building blocks of nature -- electrons -- to open the world of the super tiny.

In general, scanning electron microscopes use an electron “gun” to fire electrons through magnetic fields that act like lenses, focusing the electrons on the sample the researcher is studying. The electrons striking the sample cause it to give off additional electrons, known as “secondary electrons.” The ejection of these electrons sends a specific signal based on its composition that the machine or researcher can interpret. The beam of electron quickly “scans” across the sample, striking it over and over in different areas and illuminating it as it moves.

The machine then assembles this “mosaic” of electron-generated images into an overall image that can reveal a sample’s shape and structure, as well as its composition.

The new machine, however, goes beyond that capability. Most such instruments have two detectors. But this one, like a nice new car, comes fully loaded. It has eight different detectors, including the ability to do X-ray microanalysis, additional electron detectors and an “environmental” operations mode that allows a researcher to look at so-called “wet” or living samples that otherwise would be destroyed by the high vacuum normally required for electron microscope samples.

“Those are all tremendous challenges for a sample,” Bozzola said. “You could never do that, for instance, for a biological sample. It would just fall apart and dehydrate in the high vacuum required. It’s an amazing capability.

“It just has a lot of features built into one microscope, like having five or so different microscopes. It’s high-resolution traditional. It’s analytical. It has X-ray microanalysis. It’s an environmental microscope that allows you to look at hydrated samples, it’s a low-vacuum instrument, that allows you to look at something like a leaf, that’s not wet but still wouldn’t do well under high-vacuum,” Bozzola said. “Also, we can add even more capabilities in the future. It’s very versatile. Many different disciplines will find it useful.”

The X-ray microanalysis capability allows researchers to further explore structures by focusing electrons on specific areas and observing the X-ray wavelengths created in response. New software can even tell researchers within 90 seconds what elements are involved in the structure’s composition, complete with a calculation of the percentage of the various elements present.

“It will even make suggestions to the researcher about checking the results under different sets of conditions that might give it a better idea of what elements are there,” Bozzola said. “It can help a researcher rethink concepts when they don’t get the results they were expecting.”

Aouadi, associate professor of physics at SIUC, said the brightness of the images created by the device is a big advantage, along with the ease of creating 3-D images of nanoscale structures.

“You can’t see a lot of detail if it’s too dark,” Aouadi said. “We are working at the nanoscale, and you have to be able to control these materials at that scale in order improve and optimize their performance.”

For instance, Aouadi is working on “nano trees” that could be used to mitigate pollutants or isolate elements -- such as hydrogen from water -- for use in energy applications by decomposing or oxidizing them. His work, however, requires a firm understanding of the “trees’” physical structures, which can be greatly altered by small changes in the technique he uses to manufacture them. In such cases, high resolution, bright images and 3-D capability offer huge advantages, he said, comparing it to the difference between seeing the Earth from deep in space as blue and green marble and being able to see critical details such as actual land forms and infrastructure.

“It changes everything, being able to see it up close. It changes they way you understand it,” he said.

The older electron microscopes could produce 3-D images, Bozzola said, but the process was tedious and inefficient. The new device has software than can easily combine two images for 3-D effects, allowing a properly bespectacled researcher a chance to immerse himself or herself in their work.

“It’s fun to look at it, but the important thing is it makes it possible to take measurements that couldn’t be done before,” Bozzola said. “It helps researchers look at a specimen from different angles and better interpret the structural relationship to other nearby structures. It helps them measure heights and irregular objects.”

Bozzola said SIUC’s status as a leading research institution helped make the case to the NSF for the funds. The University also put up money for the machine, which will help take the pressure off its other two electron microscopes, both of which, while working well, are several decades old and running out of spare parts.

“We have at least 12 research projects that need such capability,” Bozzola said. “These are researchers who are well-funded by groups such as the National Science Foundation, private industry and National Institutes of Health. Our researchers have proven they are established researchers conducting high-level research. They just need the tools.”

There have been unintended consequences, as well, however. Bozzola recounted taking a tour group through the facility and asking for a volunteer to provide a sample for analysis. A young woman offered up her recently received engagement ring.

“We examined it and ran an analysis. The diamond should have come back as carbon,” Bozzola explained. “Instead, we had to ask her if she knew what zirconium was.” 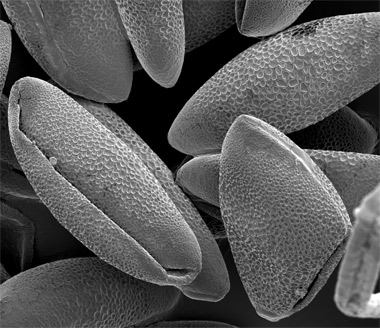 Pollen seen close up -- A typical image of a pollen from a day lily, as
seen under the probing eye of a scanning electron microscope at
Southern Illinois University Carbondale. Researchers are using the new
tool to capture these and other images of the super small for their
research. (Photo provided) Download Photo Here 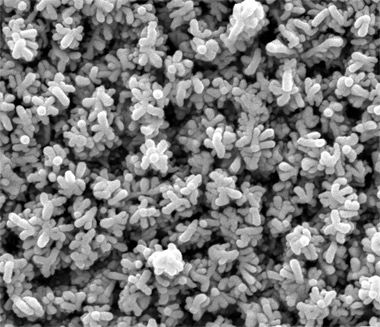 Tubular nanostructures -- A scanning electron microscope at Southern
Illinois University Carbondale captured this image of so-called "nanotrees"
as part of the work of Samir Aouadi, associate professor of physics. Each
of the tubular structures seen here is about the size of a rabies virus
particle. (Photo provided) Download Photo Here