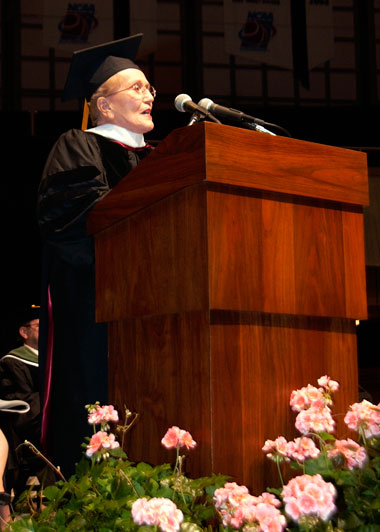 A trailblazer remembered -- Jo Ann Boydston, a distinguished professor at Southern Illinois University Carbondale and former long-time director of the University’s internationally renowned Center for Dewey Studies, died Tuesday, Jan. 25, in Naples, Fla. She was 86. In this photo, Boydston addresses graduates of the College of Liberal Arts upon receiving an honorary Doctor of Humane Letters degree in May 2004. (Photo by Steve Buhman) Download Photo Here

CARBONDALE, Ill. -- Through her detailed work that resulted in international recognition for Southern Illinois University Carbondale’s Center for Dewey Studies, a steadfast commitment to racial and gender equity, and the warmth she shared with students and friends, Jo Ann Boydston’s passion for life was evident.

Boydston -- a trailblazer in both academic and social justice areas for nearly six decades, an internationally respected scholar on American philosopher John Dewey, and a distinguished professor at SIUC -- died Tuesday, Jan. 25, in Naples, Fla. She was 86.

“We are truly fortunate to have had Dr. Boydston as a member of the SIUC family,” Chancellor Rita Cheng said. “She was a woman of great intellectual ability, and of course she was very generous to the University. She endeared herself to the members of the University community -- especially students -- with her generosity of spirit, her kindness and her compassion.”

Larry Hickman, who succeeded Boydston as center director in 1993, noted, “Without her, I don’t think there would have been a Dewey center, especially in its present form.”

Boydston and her husband, Donald N. “Doc” Boydston, were also philanthropists for several notable causes, and continually shared their love of SIUC. Their contributions to the University include an endowed chair in the Department of Philosophy in 1994, and the Donald N. “Doc” Boydston Legacy Fellowships for racial minority student-athletes in Intercollegiate Athletics in 2009.

When accepting an honorary Doctor of Humane Letters degree from the SIUC College of Liberal Arts in May 2004, Jo Ann Boydston recalled the advice that a Columbia University professor and mentor offered 55 years earlier as the couple was finishing their respective doctorate degrees.

“He said, ‘You both should always go where Don has the best offer and, of course, Jo Ann, you’ll always find something’,” she told graduates nearly seven years ago.

The “something” that Boydston found is a lasting legacy, according to friends.

In 1961, Boydston began work on the University’s new Dewey research project as associate director. Five years later she became director of what had evolved into the Center for Dewey Studies, and continued in an effort that over three decades saw the Dewey center become the world’s top repository of books, articles and other source materials for the study of America’s best-known philosopher.

Boydston was general editor and shepherded “The Collected Works of John Dewey,” considered the definitive edition of Dewey’s published works. The 37-volume collection of Dewey’s philosophical pieces and an index consists of approximately eight million words. The effort also led to publishing several ancillary aids, including “The Poems of John Dewey,” and “John Dewey’s Personal and Professional Library: A Checklist.”

“That is something that has put SIUC on the map in many disciplines, and helped to make Morris Library’s Special Collections Research Center one of the strongest archives in the United States,” Hickman said.

Those accomplishments came at a time when there were few women in key positions in academe. She was a pioneer in the field of editing, becoming the first female editor of a major editorial project.

“She was known for her innovative techniques and for the incredible precision that she demanded,” said Hickman.

Fully vetted by experts, each of the “Collected Works” volumes earned seals of approval from the Modern Language Association. Produced at the rate of more than one volume per year, the collection of writings was one of the first to employ editorial principles and procedures of modern textual criticism -- which seeks to produce an author’s intended text.

The “Collected Works” project was also one of the first documentary editorial projects funded by the National Endowment for the Humanities (NEH), which at the time focused on largely literary and historical figures. Between 1972 and 1990, Boydston secured more than $1.25 million from the NEH.

While she expected perfection at work, Boydston took students and younger employees
“under her wing,” said Barbara Levine, a textual editor who started at the Center for Dewey Studies in 1975.

“If you worked for her or befriended her in any way she was a wonderful and loyal person,” Levine said. “She was a special person.”

Harriet Furst Simon, a textual editor who has worked at the center since 1977, recalls the “logical, rational way of looking at things” Boydston used in her editorial sleuthing. She was firm in her commitment to textual editing principles, Simon said.

Among her numerous achievements, Boydston was a founding member and later president of the Association for Documentary Editing. She was also president of the Society for Textual Scholarship and the John Dewey Society, and chaired the Modern Language Association’s Committee on Scholarly Editions.

In 1995, Boydston established an award through The Association for Documentary Editing that honors the best essay or review published during the previous two years with an emphasis on editing a volume or works or documents. She also funded the Boydston Naturalism Research Fellowship and Jo Ann Boydston Library of American Philosophical Naturalism at the Center for Inquiry.

While Jo Ann Boydston and her husband were each individually successfully, friends also recall the closeness and affection the couple, married for 62 years, shared with each other.

While forging their own identities, they complimented one another as well, said Seymour Bryson, SIUC’s retired associate chancellor for diversity and now special assistant to the chancellor. Bryson came to SIUC in 1955 -- the Boydstons’ first year on campus -- and was a student worker for Don Boydston for four years.

She would often travel with Don Boydston, who also served 15 years as SIUC’s athletics director, on recruiting trips. It was her relationships with recruits’ parents and others that helped gain recruits, Bryson said.

“They were supportive of each other in their professional careers,” Bryson said. “She was always very supportive and encouraging. She demonstrated a truly sincere love for SIU and all that it stood for. They were a good couple.”

In spite of their individual successes, neither “had strong ego needs,” he said.

“They did what was right and what they believed in. Not for the publicity, they never asked for anything in return. They just wanted people to have the opportunity to do their best,” Bryson said.

Don Boydston died in March 2005 at the age of 84. Jo Ann Boydston returned to Carbondale in October for the dedication of the Boydston Center, a 50,000-square-foot facility that houses the Saluki football and basketball teams.

Carver Shannon, one of SIUC’s all-time football standouts, was a 17-year-old high school graduate from Corinth, Miss., in 1955, and arrived with the Boydstons on the SIUC campus.

“She was a beautiful lady,” said Shannon, recalling that couple, who had no children, would often tease that he was their adopted son.

Phyllis McCowen’s first job at SIUC was in Intercollegiate Athletics at SIUC, where she later worked for Don Boydston. She later became his administrative assistant when he moved to health education. She is one of several former associates and students who regularly visited the couple after they retired to Florida.

“One of the things I always admired about her is that she always had a positive attitude,” McCowen said. “You would talk with her on the telephone and she was always upbeat.”

Harold R. Bardo, director of the Medical-Dental Education Preparatory Program in the School of Medicine, earned his bachelor’s and doctorate degrees at SIUC and played basketball and ran track. He earned his doctorate in counselor education.

While not as involved in athletics as her husband, Jo Ann Boydston was definitely interested, particularly in the athletes as students, Bardo said.

“She was curious about what was happening to us outside of our lives in athletics,” he said. “She was very supportive and pleased of our academic achievements.”

Jo Ann Boydston was an “extraordinary woman,” said James M. Rosser, the president of California State University, Los Angeles. Rosser, who came to SIUC in 1958, noted that Boydston, who was Native American, was a role model in her own right.

The Boydstons “touched and affected the lives of a broad and diverse array of people who have helped to make this nation better,” he said. “They were clearly ahead of their time with respect to issues related to opportunity, equality, and social justice.”

Rosser said he hopes the Boydstons’ legacy “will forever be embedded in the infrastructure and culture of Southern Illinois University.”

Jo Ann Boydston was dedicated to students, said William R. “Bill” Norwood, a former member of the SIU Board of Trustees. A three-year starter at quarterback, Norwood graduated from SIUC in 1959 and after a six-year career in the U.S. Air Force, flew for United Airlines for 31 years before retiring as captain in 1996.

Boydston had an “absolute confidence” in her abilities and charm that disarmed many who might have initially doubted her abilities, Norwood said. But they would find Boydston’s substance “very, very quickly.”

“The Dewey Center is a testament of how successful she was at getting things done and a testament to her overall abilities,” Norwood said.

The Dewey Center is one of Jo Ann Boydston’s legacies. Hickman notes that since 1993, the Center has received close to 500 visitors from the United States, 150 visitors from more than 30 foreign countries, and hosted five Fulbright Scholars. The Center has also assisted in the founding of seven international Dewey Centers in China, Germany, Hungary, Italy, Japan, Poland and Turkey.