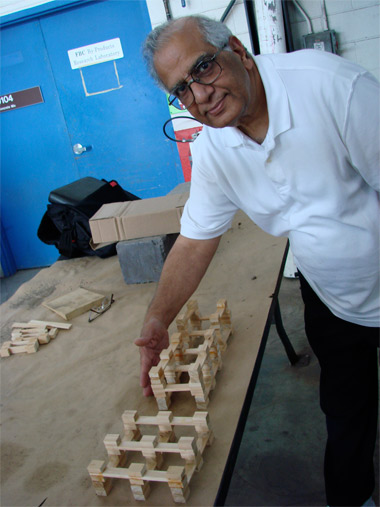 Building blocks -- Yoginder “Paul” Chugh, professor of mining and mineral resources engineering in the College of Engineering at Southern Illinois University Carbondale, shows off models of his innovative mine roof bracing system known as Atlas Cribs. The federal government recently approved a patent for the cribs, which hold many advantages over traditional mine roof bracing systems. The product has undergone several years of testing and use in three coal mines in the area, where it performed well. (Photos by Tim Crosby) Download Photo Here

CARBONDALE, Ill -- A Southern Illinois University Carbondale mining engineer’s invention has received a patent from the federal government, clearing the way to market the engineered cribbing devices to mines all over the United States.

Yoginder “Paul” Chugh, professor of mining and mineral resources engineering in the College of Engineering, along with several others, designed the Atlas Cribs as a better, cheaper and more efficient way to brace ceilings in underground mines.

The Atlas Cribs are simple but specially designed stackable wood braces that are lighter and stronger than conventional wooden blocks used by miners for centuries. The product has undergone several years of testing and use in three coalmines in the area, where it performed well.

The U.S. Patent Office issued the patent late last year, which will provide financial and intellectual protection for the University and Chugh. With three area manufacturers onboard, and a western Kentucky mine equipment supply company distributing the product, Chugh said the product has moved to the next phase.

“We are by and large out of the testing phase and into the marketing and commercialization phase. It has been tested enough that nobody should have any qualms about using them,” said Chugh, who along with former miners Harrold Gurley, John Pulliam and Bill Bell, worked on the design. “Our goal this year is to try to market our cribs in a big way.”

Atlas Cribs are comprised of a mix of hardwoods and include a main lateral element made from a board with shorter boards nailed on both sides at both ends. The engineered braces are much lighter than the traditional wood miners use now, making it easier for the miners to handle and stack them. A single crib piece weighs about 18 pounds, which is about half what a traditional 6-by-6 timber crib weighs.

The open design also makes it easier to circulate air around the cribs, which cuts down on the major operating cost of circulating fresh air. The system is also stronger than traditional methods, with its strength derived from several design factors. First, the contact areas -- the area where the braces touch each other and the load is actually borne -- are equivalent to the traditional systems. This area is about 6 inches square.

Also, the shorter boards that are nailed to both sides of both ends of the lateral board are cut and positioned so that their grain runs vertically between the roof above and the floor of the mine. This axial grain orientation is much stronger than a parallel one.

The crib braces are made from hardwoods including oak, sycamore, poplar and hickory. They come in several sizes -- Atlas 100, 200 and 300 -- with various numbers of contact areas that allow for different cribbing configurations depending on the situation, adding flexibility to the dynamic arena of underground mining.

“One of the reasons we were not pushing it very hard recently was the patent application was still pending. But now we are protected,” Chugh said.

While the original patent is complete, Chugh and his team already are working on improvements to the design. They have designed a thin steel strip that will tie the two lateral members of stacked cribs together, preventing the deformation of the stack that happens under the shifting rock loads caused by common movement of the ceiling and floors of underground coal mines. The strip, for which Chugh has filed an addendum to the patent, also increases the overall load-bearing capacity by about 25 percent. The new design is scheduled for testing by federal regulators in March.

One obstacle the new product must overcome is the traditional mindset of the mining community. Like many long-standing industries, it can sometimes be slow to adopt new practices.

As the product gains acceptance, however, Chugh and others believe miners’ jobs will get easier and mines will become more efficient and safe.

“It’s a simple design that works very well,” he said. “We are very excited about its future.” 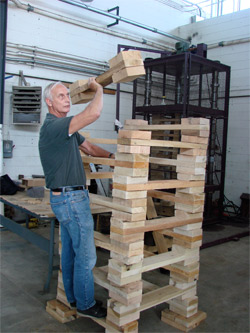 'Atlas' on display -- Harrold Gurley, a researcher
in the mining and mineral resources department at
Southern Illinois University Carbondale, demonstrates
Atlas Cribs, an innovative mine roof bracing system
invented at the University. Gurley worked with Yoginder
"Paul" Chugh, professor of mining and mineral resources
engineering, on the cribs, for which the federal
government recently granted a patent. Download Photo Here