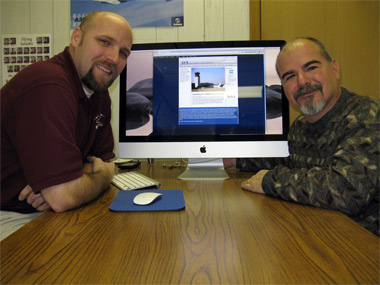 FAA to get update on airport safety initiative

Michael F. Robertson, an assistant professor in aviation management and flight, and Gary Shafer, Southern Illinois Airport manager, will show Federal Aviation Administration officials in Washington, D.C., on Friday, Jan. 28, some of their efforts to apply the airport’s safety management system, or SMS plan. Robertson and Shafer will present the airport’s revamped and updated website, which now includes a safety management system web page that allows people, including the public, to submit confidential online hazard reports.

Southern Illinois Airport is one of 14 in the nation participating in an FAA pilot study designed to provide a systematic and proactive approach to safety in and around the nation’s approximately 600 certified commercial airports. While Southern Illinois Airport no longer receives scheduled commercial service it remains certified to permit large commercial aircraft charters to the airport, which occurs periodically.

All 14 airports in the pilot project are expected to give updated summaries on their individual projects, but the Southern Illinois Airport group is one of only a few to give specific presentations during the one-day conference, said José R. Ruiz, an associate professor in aviation management and one of the project’s principal investigators.

Landry Consultants of Seattle will also be part of the presentation team, Shafer said.

“The Southern Illinois Airport is among a select few airports from across the country to participate in this project,” Shafer said. “It is an honor to be part of the group of airports that will help the Federal Aviation Administration develop their strategy for rolling out Safety Management Systems to the other 600 airports targeted for this program.”

Confidential reports of existing or potentially hazardous conditions or events at the airport may be submitted online through the SMS tab on the airport’s website, www.siairport.com/. Several drop boxes around the airport provide a chance to submit written paper reports, as well. Airport personnel, vendors, students, and the general public will be able to submit any hazard concerns. The system will allow officials to view statistics, analysis and long-term safety trends, Robertson said.

“This is another example of the excellent applied research work in aviation that SIUC aviation faculty are doing,” said David NewMyer, aviation management and flight chair, and one of the faculty members involved in the project. “I’m very proud of their work.”

Ruiz said Southern Illinois Airport is likely the only general aviation airport in the state with an online safety reporting system. He credits the work of Chris Wiegman, the department’s webmaster and LAN systems specialist, and independent consultant Rachel Thomas for their work. The website is “attractive, functional, and a way for people to educate themselves on SMS,” Ruiz said.

“This is a cutting-edge initiative for general aviation airports,” he said. “It’s an inexpensive way of being able to meet some of the criteria associated with the SMS project.”

The work also has a potential to open up additional consulting, research and classroom application opportunities, Ruiz said. He and Robertson have discussed incorporating some of the safety risk assessments into the classroom as a project.

“It’s real time, it’s applied, and it gives students a skill they can use not only operating and airport or aircraft, but it introduces them to SMS,” Ruiz said. “It will turn into a marketable skill because SMS is a leading FAA safety initiative and there will need to be folks qualified to pick up these roles.”

SIUC is the only post-secondary institution in the nation that has led three SMS projects. In addition to the two at Southern Illinois Airport, the faculty put together a plan for the North Las Vegas Airport in North Las Vegas, Nev.

“This has really opened up all sorts of opportunities for the department,” Ruiz said. “At this point, the sky is the limit as far as potential associated with this initiative.”

The Southern Illinois Airport is among the smallest airports participating in the implementation SMS pilot study, along with The Ohio State University Airport, and Dubuque Regional Airport in Dubuque, Iowa. The airport is the lone airport in Illinois to receive the additional funds to work on the second phase of the study.