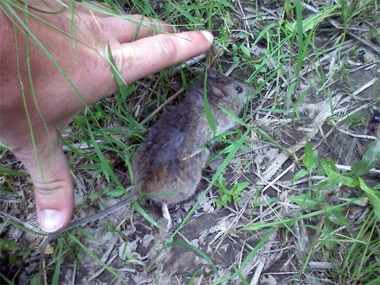 Wetland dweller -- A marsh rice rat trapped by researchers at Southern Illinois University Carbondale as part of a study on the animal’s status in Illinois, prepares to dart into the wild after being released. SIUC researchers are embarking on a more in-depth study of the marsh rice rat’s population, which could lead to its delisting as a threatened state species. Download Photo Here

CARBONDALE, Ill -- He’s brown and furry, about 8 inches long including his tail and he lives in watery, sometimes smelly areas that sensible folks tend to avoid.

Researchers at Southern Illinois University Carbondale, however, are venturing into these local wetlands in search of the marsh rice rat, which despite its small size wields big power owing to its current status as a threatened species in Illinois.

Using research money from the Illinois Department of Natural Resources, Eric Hellgren, director of the Cooperative Wildlife Research Laboratory at SIUC, is leading a small team of researchers on a four-year, $160,000 assessment of the little creature’s well being. The team will perform three years of field work, which will involve trapping and tagging some animals. After an additional year of data crunching, Hellgren’s team will offer its take on how well the species is doing, which will give state officials solid information on which to found their judgment when they revisit its status as a threatened mammal.

The animal mostly lives along the Atlantic and Gulf coasts, where it thrives in vast marshlands. Southern Illinois is at or very near the northern limit of the marsh rice rat’s range. But the area’s many low-lying flood plains, such as those along rivers, provide great habitat for the animal.

Additional emerging Southern Illinois habitats include the hundreds of wetlands in and near reclaimed mining areas, which typically play host to the dense herbaceous vegetation and high water tables in which the marsh rice rat thrives.

While small in size, the marsh rice rat plays a large role in the overall health of the ecosystem, Hellgren said. They are an important prey species for hawks and other predators in the area.

State officials placed the mammal on the threatened list during the 1970s based on the fact that agriculture and other development forces were draining wetlands for use. Enter the federal Wetlands Reserve Program, which sought to protect wetlands and mitigate their demise. Over the years, the success of the program has led state officials to question whether the marsh rice rat still needs the added protection of its “threatened” status.

“The Wetlands Reserve Program has been very successful in preserving and developing wetlands,” Hellgren said. “The reclaimed mines also have increased (wetlands), and the fringes around those areas are really good habitat for marsh rice rats, too.”

A 2007-2009 SIUC study by former graduate student Bryan Eubanks identified many places where the rats are living in the area. This follow-up study will go deeper, Hellgren said, and seeks to better define the population’s hardiness and the factors that affect it.

“Bryan’s study showed that they are pretty widespread in Southern Illinois and the state’s interest in this is whether the animal should remain on the threatened list,” said Hellgren, who is working with doctoral student Jorista Van Der Merwe and master’s student Scott Cooney on the project, as well as SIUC wildlife researchers Eric Schauber and Jack Nawrot. “Simply having it on the list affects many land-use decisions; mainly mining, but also road construction and agriculture.”

Hellgren hopes to set traps for the animal in several hundred locations around Southern Illinois, focusing on two main areas: the Mississippi River floodplains and reclaimed mining areas. After trapping, the team also will tag some specimens with radio transmitting collars, so they can follow their journey during the animals’ typically short lifespan of about 1 or 2 years.

The researchers especially will be looking at the relationship between the marsh rat population’s stability and wetland hydrology, considering factors such as how quickly it can colonize an area and how the population expands and contracts over time as water levels change. The team also will examine how different populations of the animals interact.

“We want to know what type of wetlands they prefer, how readily they can move between wetlands and how connected these wetlands might be,” said Hellgren, comparing wetlands to islands that have the potential to support marsh rice rat populations.

Researchers also might use a stable isotope mass spectrometer to examine hair samples from the rats in hopes of better defining its diet. The instrument should be able to tell what percentage of its diet is made up of insects as opposed to vegetation.

Taken together, the study should give state wildlife officials the information they need to make informed management decisions.

“We want to find out how stable these populations are,” Hellgren said. “They may be so abundant and so well distributed that they are no longer threatened.” 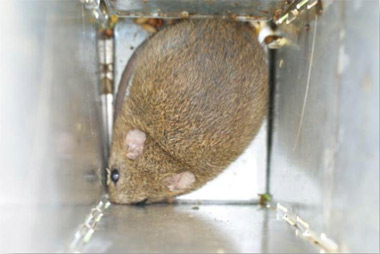 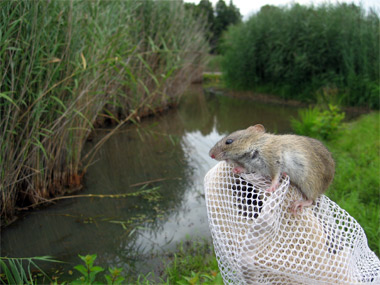 Wetlands resident -- Researchers at Southern Illinois University
Carbondale prepare to release a marsh rice rat captured as part of
a study on the animal's status in Illinois. SIUC researchers are
embarking on a more in-depth study of the marsh rice rat's
population, which could lead its delisting as a threatened
state species. (Photos provided) Download Photo Here