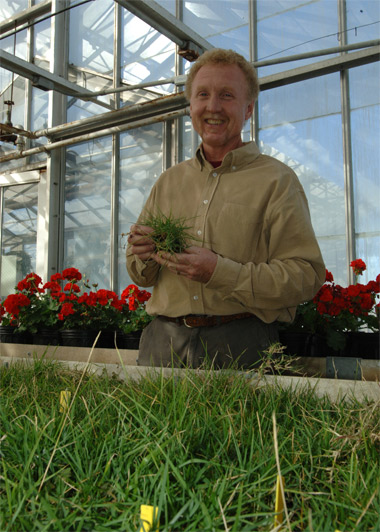 Proud papa -- In the horticulture research greenhouse at Southern Illinois University Carbondale, turf expert Kenneth L. Diesburg shows off what he says is the “best zoysia grass in the world,” the result of 12 years of plant crosses he’s made. (Photo by Jeff Garner) Download Photo Here

CARBONDALE, Ill. -- In the search for an environmentally friendly “supergrass,” Kenneth L. Diesburg thinks he has unmasked a winner.

“Zoysia grass,” says Diesburg, Southern Illinois University Carbondale’s turfgrass expert. “It grows short and thick without any fertilizer, resists drought, can take trampling and over the long run out-competes weeds so you don’t need any herbicide. The only maintenance you have to provide is mowing, and because it’s a warm-season grass, you dramatically reduce mowing in spring and fall, so you’re cutting back on gas consumption, which reduces its carbon footprint.”

Zoysia grass is slowly becoming known in the transition zone -- a temperature-based hardiness region that stretches in a 100- to 200-mile-wide band from the Rocky Mountains to the east coast. Diesburg’s a man with a mission: to convince anyone within that zone as well as 200 miles north and south of it to give this “green” variety of green a try.

Zoysia has it all over tall fescue, the zone’s more common grass of choice, Diesburg believes.

“Fescue is not a spreading grass -- it’s a bunch grass,” he says. “That’s its great weakness because it allows openings in the turf for weed invasion. You have to maintain it to keep it thick enough to keep out weeds, and that means a pre-emergent herbicide in the spring and sometimes another herbicide application in the fall. You also need water to keep your stand during drought and fertilizer to minimize stand loss due to poor soil.

“Zoysia grass, on the other hand, once it gets established, spreads. If a gap develops somewhere, it will reclaim that gap. Its shoot density is so high that weeds just can’t invade, and it can do this all by itself -- no fertilizer or herbicide required. Zoysia grass is as drought tolerant as tall fescue -- it will start going brown after about a month with no rain -- but it’s in the recovery from drought where zoysia grass has the advantage. Because it has all those growing points spread out uniformly, it comes back really quickly.”

Zoysia isn’t perfect, Diesburg admits. Being a warm-season grass, it turns a golden tan when it goes dormant in cold weather. The three most common cultivars are clones -- they don’t set seed -- so getting the grass started generally requires the use of expensive plugs or squares of sod. And while there are seeded varieties, they don’t initially perform in the same way the cool-season grasses do.

“When you put seed down, people expect it to come up in a week or two, to cover the space and look good from the get-go,” Diesburg says.

“Zoysia grass can’t do that. It will germinate in the same amount of time as the others, but the seedlings are very short and slow growing, so it gets a lot of weed competition at first because of that, and crabgrass will dominate. You just have to keep cutting the weeds down low to allow more light to get down to the zoysia and be willing to live with the crabgrass all summer long. By the second season, the zoysia grass will thicken and out-compete the crabgrass.”

After some two decades of working with this grass species, Diesburg has concluded that when it comes to sowing seed, timing is everything.

“The general rule for establishing a warm-season grass has been to plant it at the beginning of the warm season, right at the front of its best growth period,” Diesburg says.

“With zoysia grass, that has meant May through June. While it does germinate then, the weakness is that heat dries moisture out of the soil, and keeping soil moist is tough to do when it’s hot. It’s that dryness that causes the seedlings to fail.”

Beginning in 2005, Diesburg conducted timing experiments, sowing seeds from November through August with no irrigation. He found that seeds sown up through April did just fine. Germination began to taper off in May, got worse in June and utterly failed in July and August.

In 2010 Diesburg started another experiment to determine more precisely which spring seeding period produced best results. He sowed seed each week from the first of April through the third week in June, again with no irrigation. He got successful stands until the last week of May, but the seeds sown in June produced poorly. Again, rising soil and air temperatures drove moisture out of the soil too soon, and the seedlings germinating in June died.

“This confirms for me that winter-dormant and spring seeding is the best way to seed zoysia grass,” Diesburg says. “With winter-dormant seeding -- and early April is essentially winter-dormant seeding since the temperatures are still too cool for germination -- you’re taking advantage of that spring moisture coming out of the winter. The seed is there and ready to go as soon as the warmth comes up, and it gets as much moisture as it can before it starts to get dry. June is just too late.”

The grasses Diesburg works with come from his own breeding of zoysia germplasm collected by another turf scientist years ago in China and the Pacific Rim.

“My lifetime goal is to develop the first seeded variety of zoysia grass that is comparable to the Meyer clone (today’s standard of zoysia excellence),” Diesburg said. “I think I made enough crosses this last summer that that future variety will be among them.”