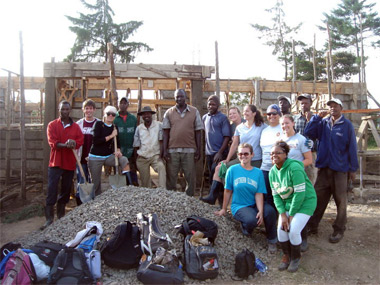 In progress — With the library they are building half done, graduate students from Southern Illinois University Carbondale’s Department of Educational Administration and Higher Education and workmen from the Kenyan village of Kambi take a break. (Photo provided) Download Photo Here

“The village was so remote, so removed from the conveniences of everyday life that we have grown up with, but there was such a sense of joy and gratitude and fun,” said graduate student Susan Drone-Prickett, who traveled to Kambi during the summer as part of a Southern Illinois University Carbondale study-abroad and service-learning program.

“My Kenya experience drove home the fact that in the United States, we have always had such amazing opportunities. There is really no excuse to not maximize the gift of possibilities that is inherent in being an American citizen. What is the biggest and most important use of my time and money for the rest of my time in this realm? What is the most significant way I can leave my mark, make an impact? I am really grappling with that.”

This particular trip was one of several put together for SIUC students by Peter Gitau, a native Kenyan and, since 2008, the University’s associate vice chancellor for student affairs and dean of students. Gitau says study-abroad programs in general take students out of their comfort zones, thrusting them into a new world where everything -- from food to driving habits -- is different.

“Over the last 10 years, I have connected study-abroad programs with service learning in Kenya,” he said. “The result has consistently been one of radical transformation and a palpable desire and commitment to participate in finding solutions for global problems. As they gradually adopt a global citizen’s worldview, the participants’ mindsets change from an initial, self-centered ‘what can this trip do for me’ attitude to ‘what role can I play to make the world a better place.’ In the end these students return to SIUC as better students.”

Forty-two students from across the University took part in the 2010 trip. In addition to educational tours and sightseeing, the students split up into smaller groups to provide hands-on help with various service projects to people in three different villages.

“The point is that we don’t just take from the community that hosts us, giving us food, time, resources, knowledge, but that we give back,” said Tamara L. Yakaboski, a faculty member in the Department of Educational Administration and Higher Education, who accompanied nine of her students to Kambi.

“During our homestays in the village, we had group meals at Peter’s mother’s house. I think that integration was a critical experience to understanding Kenyan culture and the meaning of community and family. We witnessed his amazing work in his community. He continues to give back even though he left Kenya 16 years ago. Seeing his community service taught us and took the idea of giving back to communities and developing reciprocal relationships to a whole new level.”

Before they left Carbondale, members of Yakaboski’s group began raising money to help the people of Kambi build a new library, one of the needs Gitau had identified. She and her students sold pork butts -- “Thousands of dollars of pork butts,” Yakaboski said with a grin. And once they got to Kambi, they rolled up their sleeves and got down to work.

“If we needed a ladder, we had to make it out of tree limbs -- there was no going to Home Depot to pick one up,” Yakaboski said. “We made our own cement, we made our own window braces, we cut rebar with saws and wire clippers.”

Kristin B. Dade, a graduate student whose previous construction experience had been limited to assembling furniture from Walmart, said she enjoyed “getting down with a saw that had no teeth and working with it. We really built some muscles with that experience,” she added, laughing.

And as the walls of the library went up, some of the villagers’ stereotypes came down.

“In Kenya, construction is a male occupation,” Yakaboski said. “By the end of our time there, Harrison, the foreman, wanted us to know that our group had changed his mind about women. He said he hoped that the local women saw us and saw how good we were and that they would want to pursue jobs in construction themselves. That was a good moment for us.”

While Yakaboski’s students are all working on graduate degrees in education, their studies focus on college students, not those in primary grades. Yet, the village children captured their hearts. When the students learned that some of the children could not go to school because they couldn’t afford school uniforms, they pooled their cash and bought shirts and pants, blouses and skirts.

“We were able to outfit several children, and they started school the next week,” Yakaboski said. “That was a humbling moment. It wasn’t much money, but this one gesture changed a few lives.”

But the children of Kambi gave as good as they got.

Cerra R. Wilson, who had long dreamed of going to Africa and seeing the “motherland,” said she taught a classroom session on self-esteem that required each child to write on a piece of paper something nice about someone else. She was flattered when one of the children wrote about her.

“The paper said, ‘I like your smile. You have good behaviors,’” Wilson said with a likeable smile.

Dade recalled that at the end of the visit, the children surrounded the bus that would take the SIUC students away.

“They were all saying, ‘Take me with you, please don’t go,’” she said. “We got all these letters from the students saying, ‘Thank you for building our library. Please write to me.’ So now I have 50 penpals.”

Wilson, Dade and Drone-Prickett all found their Kenya summer life-changing.

“When you travel abroad, you learn more about yourself,” Wilson said. “It was the greatest experience of my life so far.”

Dade also said she’d learned about herself. “I learned that I don’t need everything I have,” she said. “I also learned a lot about how privileged I am being a woman here as compared to there. I have access to education. I can have my own opinions, a voice that can be heard even if some people won’t listen.”

Drone-Prickett said the experience will remain with her for the rest of her life. “Since I came back, whenever I feel I am struggling, I think, ‘Kenya,’” she said. “Those people are survivors, and they don’t just survive -- they thrive. It was inspiring.”