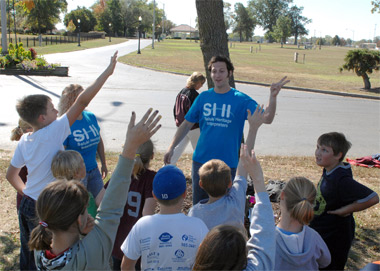 CARBONDALE, Ill. -- Everything everywhere speaks to us, but we often don’t understand what is said. Interpreters help us make sense of the stories the natural world, historical objects and cultural remnants have to tell us. At Southern Illinois University Carbondale, a group of forestry students is learning to give those stories a voice.

“They want to be able to reconnect people -- especially young people -- to the natural world so that they will be inspired to become engaged citizens, actively supporting and protecting the world’s natural, cultural and historical treasures.”

“The club is not large, but those who are in it are extremely active,” Seekamp said. “They do so many things that making it larger would mean not all students could participate in all activities.”

“It’s an art form,” Seekamp said. “You are creating something, not just giving a lecture. Anyone can read a book and identify a tree, but to tell a story that engages people so they want to know more -- that’s something different. You have to have a hook, some mystery that keeps them wondering what’s next so they don’t walk away.”

Housed as it is in the forestry department, the club draws a lot of students interested in the out-of-doors, but interpretation focuses on more than just the natural environment.

“That’s why the club has the word ‘heritage’ in it,” Seekamp said. “Artifacts tell the story of the past that has created the conditions we have now. They teach us how humans have interacted with the environment for centuries and more.”

Club President Jodie C. Delaney, a senior from Herrin, said her experience with the group led to a change in career plans.

“Originally, I wanted to be a conservation officer, but by the second semester, I knew that working in interpretation was much more rewarding than doing law enforcement would ever be,” she said.

Delaney now works as an intern in interpretive service at Crab Orchard Wildlife Refuge. (For a look at Delaney in action, click here)

“I think my experience as an interpreter got me the job,” she said. “My boss told me she’d been looking for someone who already knew how to do this because they were short-staffed and she didn’t have time to train anyone.”

Sherri L. Wurtzel, a senior from Pecatonica who has held just about every office the club has, thinks it serves as great career preparation.

“The club has given me leadership qualities,” she said. “I have had to contact people, organize schedules and events. It also has given me the ability to learn how to be an interpreter and communicate my message to the public.”

While Seekamp believes the club makes a huge contribution to environmental literacy in the region, she sees the downstate connection as just the first step.

“The experience club members are gaining at this local level will enable them to move on to the next -- in the state, in some other region, even overseas,” she said. “Cumulatively, they can influence a lot of people, including the decision-makers of tomorrow, to connect with the natural world and take an active role in protecting it.”