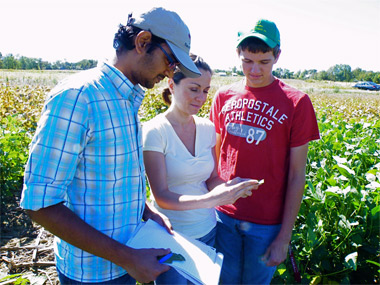 “It was most severe at Belleville. We didn’t even have to walk to the field -- you could see it from a distance.”

Plants afflicted by the virus first develop yellow splotches near the veins on their leaves. As the disease progresses, the patches grow larger and darker, giving the leaf a scorched appearance before the virus kills it.

“The disease starts with yellow lesions as do many of the fungi attacking soybean,” said Ioannis E. Tzanetakis, a plant pathologist from the University of Arkansas who first saw the disease there shortly after his arrival in 2008.

“With this disease, though, the lesions are more extensive, and they eventually become necrotic, killing the affected area. While the vascular system does not collapse as it does with soybean sudden death syndrome -- it doesn’t kill the stem -- if you lose all the leaves, I am not sure how much yield you will have.”

Given the virus’s reach -- Tzanetakis has found it not only in Arkansas and Illinois but in Kansas, Mississippi and Missouri as well -- he speculates that it has been active for more than a decade. Still, there’s some good news. It does not hit all soybean cultivars in the same way.

“Some have all the leaves involved, others have only a spot here and there,” Tzanetakis said.

“This is where Stella’s contribution will be very important. We don’t really know much about the virus (genetic sequencing reveals no matches with known viruses), so we don’t know whether there is natural resistance to it.”

Kantartzi’s breeding program combines work in the field and lab with computer technology, allowing her to search the DNA of plants grown in research plots for sequences, or “markers,” linked to genes with desirable traits.

“In the field, we saw that some of our advanced breeding lines were hit by the virus and others didn’t have any symptoms,” she said. “We are now inoculating plants from all those lines with the virus and screening them in the greenhouse, hoping to identify some that are tolerant of the virus and some that are susceptible. We will then take the tolerant lines back out to the field and look at yield potential.

“At the same time, we will be crossing resistant and susceptible lines and screening with molecular markers in the lab to find the genes associated with resistance. Once we’ve found them, it will be easy to map them on specific chromosomes so we know their exact location.”

The map will allow them to confirm more quickly the presence or absence of resistance genes in other lines. Aided by SIUC graduate student Rajesh Dabala, SIUC freshman Ian H. Kessler, an undergraduate researcher funded by the Illinois Soybean Association’s scholarship program, and Jing Zhou, an Arkansas graduate student, the pair expects to complete screening of 100 lines by next summer.

“The ultimate goal is to release resistant lines that still have the other qualities farmers care about -- seed quality, high yield potential, resistance to other diseases,” Kantartzi said. “Because we are starting with advanced lines that already have these qualities, we do not expect it to take very long to release a line to companies for commercial development.”

Added Tzanetakis, “We’re putting a lot of energy into this project -- we feel it’s pretty important.”