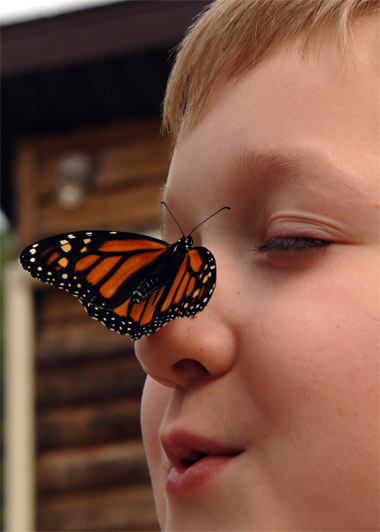 Boy and butterfly -- A female Monarch rests for a moment on the nose of Donovan McNelly, 9, before taking off for Mexico. (Photos by Russell D. Bailey) Download Photo Here

CARBONDALE, Ill. -- When a Monarch sits on your nose, it tickles.

So says Donovan McNelly, 9, and he should know. A female Monarch butterfly out at the Crab Orchard Wildlife Refuge rested on his nose for more than a minute after Ranger Jodie C. Delaney finished tagging her.

As he watched her finally fly away, Donovan, who said the butterfly’s black-and-orange wings looked to him like a Mardi Gras mask, thought back to what Delaney had told him earlier that morning. If she weren’t picked off by bird or dragonfly, if she survived weather and wind, this young Monarch would fly more than 2,000 miles to a remote spot in Mexico. There, a scientist would gently grasp her by the thorax, read the thin, paper tag on her hind wing and learn that she had traveled through the Crab Orchard refuge to reach her winter home.

“I hope they find that butterfly on my nose in Mexico -- that would be cool!” Donovan said with a grin.

Donovan, along with some 60 other fourth-graders from Carbondale’s Lewis School, had come to the refuge for the year’s final “butterfly round-up.” Led by Delaney, a 23-year-old senior in forestry from Southern Illinois University Carbondale, the round-up included a breathtaking video on Monarch migration, huge replicas of the insect in various stages of its life cycle, butterfly capture and identification, and the tagging and release of three Monarch butterflies that had emerged from their chrysalises just hours before.

“Like many of the programs we do here, it has specific educational goals, but collecting and tagging the butterflies is also a lot of fun,” said Delaney, who began working as a part-time ranger in June through the U.S. Fish and Wildlife Student Temporary Employment Program. “Sometimes I feel like I’m getting paid to play.

“And I love the beauty of the way children get involved and grasp things. It’s so rewarding for me to help them get in touch with nature.”

For Delaney, who is specializing in forestry interpretation, the ranger job is both a perfect fit now and a steppingstone to the future.

“I’ve always been a wildlife advocate, and most of my programs teach kids about wildlife,” she said. “This gives me some experience in the field, which should make a big difference when I start looking for a full-time, permanent job.”

This last round-up very nearly didn’t get off the ground. After weeks of bright sunshine, the mid-October day dawned cool and gray.

“I’m kind of bummed out about the weather,” Delaney said, eyeing the sky shortly before the big yellow school bus pulled up at the refuge visitors’ center.

“But it’s a teachable moment. I can talk about the difference between moths and butterflies, how moths get their warmth from beating their wings and how butterflies rely on the sun.”

Still, by the time Delaney had employed her outsized visual aids in teaching about egg, caterpillar, chrysalis and butterfly, passed around pictures of common Illinois butterflies, showed her video and answered some questions -- Do bald eagles eat butterflies? Could the kids catch “dragontails”? Had “Miss Jodie” ever seen a vampire butterfly? -- a pale sun was shining weakly. Delaney decided to gather her group and head on out to a nearby field. As a precaution, she took with her a small, netted cylinder housing her back-up butterflies.

“Don’t run, jump and scare them,” she cautioned, as she passed out nets, battered by dozens of previous butterfly hunters. “Wait for them to land, then drop the net on top of them. You can run as far and wild as you like, but I recommend you stay to the edges of the field.”

“Those butterflies have no idea what’s in store for them,” he said.

The sun shone more brightly, the air resounded with shrieks.

“They’re all out of butterflies,” one child muttered as he walked around dragging his empty net.

“That’s a moth, but it’s OK,” Patrick told one boy as he emptied his net into a portable butterfly holding house for later identification. “You caught something.”

“I didn’t catch anything,” another told Delaney with obvious disappointment. She nodded sympathetically. “But at least you got to be outside,” she said.

At final count, the round-up netted two salt marsh moth caterpillars, a grasshopper, a couple of skippers, a pearly crescent, several Eastern tail blues, a buckeye and the star of the show, a question mark butterfly, a spotted black-and-orange beauty with scalloped wings.

Patrick, who’d been holding the portable butterfly house when that particular butterfly went in, was practically speechless as it spread its remarkable wings.

Tag and release caps off the round-up. If they’d caught any Monarchs, Delaney would have tagged those, but spring predictions for a bad year for the species, with population declines of as much as 50 percent, have borne out.

“We’ve seen only about 100 where usually it’s two or three times that,” Delaney said.

So she brought her back-up butterflies into play. After corralling Donovan, a “volunteer with good handwriting,” to record her data, she reached into the cylinder, gently grasped a butterfly by the thorax (“Never touch the wings!” she admonished), determined its gender by examining wing spots, placed an identification tag on the discal (or, in Lewis-speak, the “disco”) cell, and then set the butterfly on the nose of a willing volunteer.

Two of the three Monarchs (all females, Delaney told the children, to the accompanying cheers of the Lewis girls) flew off in an instant. Only Donovan’s butterfly hung around -- for so long that Delaney finally had to nudge her off the now-fidgety boy. “She must have thought I was Butterflyman!” Donovan said with some obvious relief at her departure.

Still chattering about what they had seen, the kids began piling into their yellow bus. Delaney scooped up her nets, her portable houses and the small, netted cage that had so recently contained the flutter of delicate wings.

“One little boy just told me that this was the best day of his life,” she said as she put her equipment into her white service van. “That’s the best reason to do this.”