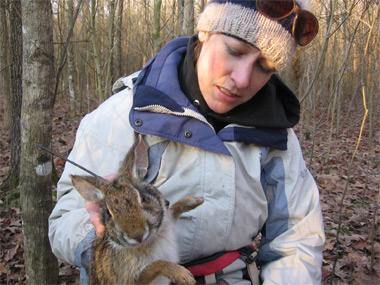 Collared -- Down on the Cache River, Southern Illinois University Carbondale graduate student Leah Berkman holds a swamp rabbit fitted with a tracking device that will allow researchers to follow it. (Photo provided)

CARBONDALE, Ill. -- Federal programs that pay farmers to give cropland back to Mother Nature are helping a declining species hold its own in the bottomlands of Southern Illinois.

“These recently re-forested lands provide forage and cover not available in the mature forests. We found swamp rabbits were more abundant in shrubby, irregular patches with brushy edges and frequent stumps. The closer the site was to a wetland, the higher the abundance.”

Along with zoology colleague Eric M. Schauber, Nielsen has just wrapped up a four-year assessment of the programs’ effectiveness in reclaiming swamp rabbit habitat along the Cache River and Cypress Creek. Articles on their research, funded by a federal grant administered by the Illinois Department of Natural Resources, have been published in “Journal of Wildlife Management” and “Wetlands” and will appear soon in “Endangered Species Update”and “Journal of Mammology.”

Concern about shrinking numbers led Nielsen to begin studying both swamp rabbits and Eastern cottontails about five years ago. But while both are losing ground, you’ll find far more cottontails than swampers, Nielsen said.

“Cottontails are primarily an upland species and are able to exploit more habitat types, where swamp rabbits are specialists,” he explained. “They’re found in bottomland hardwood forests with a mix of mature forest, brushy areas and a watery component. Ninety percent of these are gone, not just in Illinois but in North America.”

The researchers also analyzed rabbit tissue and droppings to track genetic relationships between the animals they studied. The answers would tell them how much the rabbits get around.

“There is some isolation, indicating that habitat fragmentation is adversely affecting the flow of genetic material,” Nielsen said. “It’s not the same kind of huge problem it is with a species like cheetahs, where inbreeding is threatening their survival, but over a long time frame, this could lead to more susceptibility to disease and eventually to a population collapse. If one population is wiped out, its habitat may not be re-colonized because the other populations are just too far away.”

In Illinois, much of the remaining swamp rabbit habitat lies on public land, but keeping it in tip-top rabbit condition would require logging and burning to create the brushy areas these critters depend on. Opposition to such practices on public lands underscores the importance of private ones.

“Logging and burning can be done much more easily on private land if the landowner is willing,” Nielsen said. And a survey done as part of the study showed many are.

Some 150 landowners, most of whom enjoyed hunting and trapping on their land, responded to the survey. These folks generally practiced some form of wildlife habitat management, and nearly half of them were already enrolled in one of the federal conservation programs. Those who’d seen swamp rabbits on their property tended to look favorably on efforts to improve habitat.

“That tells us that the best way to conserve these animals is to work with private landowners,” said graduate student Joanne C. Crawford, who has worked on the project for the last year. “It’s in everyone’s best interest to get them into those federal programs that are restoring the land. These programs have been instrumental in swamp rabbit conservation.”

While the first phase of the research is finished, that work raised new questions. Crawford is taking it to the next level, attaching radio collars to individual rabbits and then following them around.

“I want to know where they live, how long they survive and what kills them,” she said. “How does available habitat influence home-range size and their survival? In highly fragmented sites, do they get picked off by predators more often than they do in areas of larger forests?

“One of my main questions is how they are using these young forests: only in the winter, year round or just for certain behaviors? And what happens when swamp rabbits and Eastern cottontails use the same land? What are the impacts on both species?

“We have the rabbits collared and anticipate the work will continue for four to five years,” she said with visible enthusiasm. “Stay tuned -- there’s more to come!”