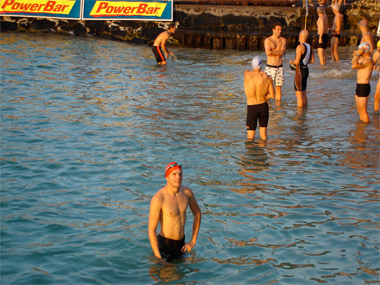 In so doing, the Southern Illinois University Carbondale graduate student at age 26 joined the elite ranks of those qualifying for and completing the 2010 Ford Ironman World Championship. Monroe didn’t just compete in the event earlier this month at Kona, Hawaii. From a field of 1,800 selected competitors from around the world, Monroe finished 452nd overall and 48th in the 25-29 age group.

“The race begins at the ocean where you contend with salt and waves and moves into the lava fields where there’s a lot of radiant heat, wind and no vegetation,” Monroe said. “Although my time wasn’t quite as good as I wanted, I’m still happy with my finish, especially since this is just the second Ironman I’ve ever done.”

The son of Rusty and Debbie Monroe, Monroe is no stranger to the world of sports. A Springfield native, Monroe ran cross-country and track at Rochester High School and competed in both sports for SIUC while earning bachelor’s degrees in forestry and administration of justice. He ran the indoor mile and 3K races and the 1,500-meter and steeplechase races outdoors in addition to cross-country. Among his career highlights was a sixth-place finish in the indoor mile his senior year at the Missouri Valley Conference championships.

A spring 2007 graduate, Monroe is currently pursuing his master’s degree in forestry at the University. After all of those years of distance running, he was feeling a little burned out but wanted to keep in shape and stay involved in competition. He ran a short-distance sprint triathlon in his hometown in 2005 and enjoyed it, so he decided to train for the event that combines swimming, running and biking.

“With the training, the hardest part is balancing all of the things in your life with your other interests and training,” Monroe said. After all, in an average week he’ll run 20-40 miles, swim 2-5 miles and bicycle 100-200 miles. The daily workout varies according to his physical condition, race schedule and whether it’s a build-up, recovery, or speed week, as well as his other obligations.

“But hey, everyone is busy. You just have to get in the routine and make the time. A lot of times, I do my training early in the morning or late in the day so I can get everything done that I need to,” Monroe said.

After competing in a few of the shorter sprint and Olympic distance triathlons, in 2009 he raced in his first half-Ironman event. (Yes, each of the distances in the half Ironman is half of what it would be in a full Ironman). This year, Monroe added two more of the half-Ironman competitions and in late August, entered his first full Ironman, the Ford Ironman in Louisville, Ky. Amazingly, he finished 20th overall and third in the 25-29 age group. That earned him the right to participate at the Ironman World Championship.

Thousands of people around the world compete in triathlon events each year, but just 1,800 get the opportunity to race in the Ironman World Championship. In addition to finishing well in the competition, Monroe had a somewhat unique “trophy” to show for his efforts. He has a temporary tattoo of sorts, as his race number, 1814, shows white on his arm surrounded by his racing tan.

Monroe said he appreciates the assistance and support he has received in his hometown and at SIUC, crediting friends, relatives and other supporters for enabling him to make the trip to Hawaii.

“A lot of people have been very supportive for me and they’re excited for me. That means a lot,” Monroe said.

Also invaluable to Monroe is the training work he does with the Saluki Masters Swim Team, the Team Surgeon Bike Team and the SIUC club cycling and triathlon teams.

Monroe said he’s going to enjoy the off-season breather from triathlon competitions to focus on his schoolwork, do some mountain biking, and ramp up his indoor swimming workouts. He’s quick to point out that the swimming area is his “weakness” since some of his best competitors can swim the 2.4 miles in less than an hour, whereas he took almost an hour and 25 minutes. Of course, he’s only been swimming competitively for the last couple of years.

And, his times for the running and biking part of the triathlon place him high up in the ranks. Monroe ran 26.2 miles in 3:07.03 and bicycled 112 miles in 5:21.52 in Hawaii and his transitions between events were both less than three minutes long.

“It’s pretty addictive,” he said with a grin. Monroe said he’ll also soon be selecting his next competition since the events tend to fill up quickly.

Academics remain a primary focus for Monroe, as he plans to complete his master’s degree within the next year and will seek a career in his field.

“There are a lot of things that I’m interested in that I can do with the degree I will have,” Monroe said.

“Everything I’ve done has been because I’ve been here at SIUC. To get a forestry degree in-state I had two state universities to choose from. To me, it made sense to come down here where the Shawnee National Forest and all these great parks are,” Monroe said. “During the summers I’ve been able to work for the Forest Service and get valuable experience. Running track and cross-country in high school and at SIUC have prepared me for the Ironman distances I’ve been training for. I’ve also had access to the luxury of an Olympic-sized pool on campus to train in and to the great hills and other beautiful places to train, too. And, there are groups of people here that bike, swim and run that I can train with. It’s great all the way around.”