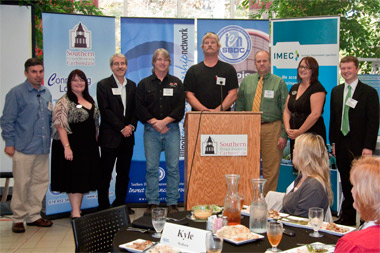 A dozen entrepreneurs participated Tuesday (Oct. 12) at the Dunn-Richmond Economic Development Center in the competition covering the southern third of the state. There were two divisions in the contest: early stage and late stage. The early stage is for those who have an idea for an innovative product, service or process with lasting economic impact, while the late stage is for entrepreneurs with new companies that have recently created or implemented an innovative produce, service or process already showing an economic impact in Illinois.

The four winners from this week’s southern competition will advance to the state Innovate Illinois contest Dec. 16 in Chicago. They’ll compete against the early and late stage competition winners from the central and northern Illinois semi-finals, slated for later this month. From the top six finalists in each category, the winner will earn a $30,000 cash prize. First runners-up in each division will get $10,000.

The other early stage companies chosen to participate in this week’s southern region competition, listed by city with the company owner’s name, were:

• On Your Own Emergency Survival Kits, Connie Shanahan.

Also competing in the late stage Southern Area Innovate Illinois Competition, listed by hometown with the name of the business owner, were:

The Illinois Department of Commerce and Economic Opportunity and the Chicagoland Entrepreneurial Center, an affiliate of the Chicagoland Chamber of Commerce, are administrators for the Innovate Illinois Program. This is the sixth year for the competition and in the five previous years, the contest has provided $530,000 in cash and prizes to 33 statewide winners while creating 500 new jobs and securing $20 million in business financing.

The SIUC Entrepreneurship and Business Development Unit hosted the southern region semi-final competition. For more information about the unit or the services and assistance it offers to entrepreneurs around the region, contact Robyn Laur Russell at 618/453-3805.