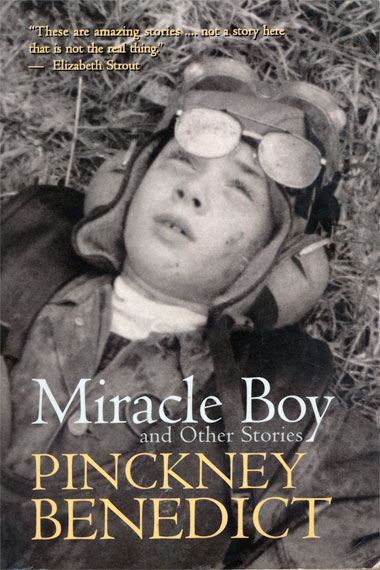 CARBONDALE, Ill. -- Pinckney Benedict, creative writing professor at Southern Illinois University Carbondale, grew up, as his author biography will tell you, on his family's dairy farm in the mountains of southern West Virginia.

The stories in his most recent book, the 2010 collection “Miracle Boy and Other Stories,” take place there -- but not there.

One of the critics proclaimed about the book that there is “… not a story here that is not the real thing,” but that is not meant literally -- few of the stories are based on actual events.

Welcome to Benedict-land, where the topography is shaped by memory, whimsy, nightmare, random fact and the willingness to follow a curious or dread thought where it leads, no matter how uncomfortable or odd.

“There is no literal place you can go to (from these stories),” Benedict said. But he also said, “I’m never called upon to make up a name, “ noting that even the peculiar names in his stories come from the names of actual people, and he also said, “I want the stories to be iron-clad as to facts.”

To write one of them, “The World, the Flesh, and the Devil,” for example, Benedict spent time in a flight simulator and also in extensive discussion with a friend affiliated with an F-14 squadron. For “The Angel’s Trumpet,” he researched dairy farm manure pits.

The collection, for all its cohesiveness, was nearly a decade in the making. Benedict pulled the stories for this collection from a variety of publications. The title story appeared first in “Esquire” and later, as an award winner, in “Prize Stories 1999: O. Henry Awards” and in “New Stories from the South 1999: The Year’s Best.” Others appeared in top-tier literary magazines such as “Zoetrope: All Story,” and “Story Quarterly.” Three received the prestigious Pushcart Award, and two, including the one mentioned above, won O. Henry awards. And some appeared first in a lesser-known publication, “Appalachian Heritage.” Several stories appear in other literary “Best of” anthologies, and one appears in “The Mammoth Book of Best New Horror No. 20.”

Benedict is busy with readings from the collection these days. Earlier this month, he was at New School in New York City, and later this month, he’ll read at SIUC’s own Devil’s Kitchen Literary Festival, to name two. And as much teacher as writer, Benedict guest taught, via video chat, a Charlottesville, Va. high school class.

“The only advice I would like to give people is to make sure you are doing your own writing,” Benedict said, noting that is his advice whether he is addressing graduate students or high school students. “My style suits me. You have to find your voice, your style. Don’t try to write in someone else’s.”

“Miracle Boy and Other Stories” is available from Press 53, a new independent book publisher. The book is available online only. Benedict noted that new publishers like Press 53, publishing on-demand and not through mainstream bookstores, seem to be the equivalent in the book-publishing world to the independent record label in the music industry and are helping to keep printed books relevant in this new world of Kindle and Nook. Find Press 53 at www.press53.com.