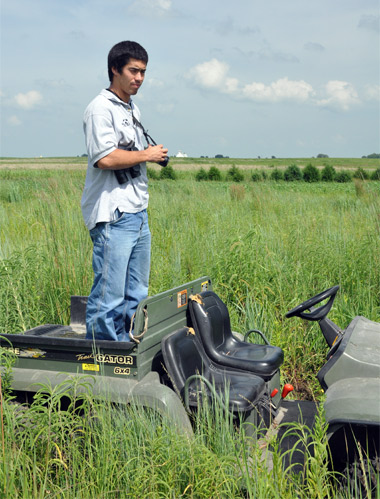 Bird “hunting” -- Justin Shew, a doctoral student at Southern Illinois University Carbondale from St. Louis, pauses in a grassy field as he collects data on bird population density in Illinois. Shew is part of a team of SIUC researchers looking at better ways to manage the fallow land to promote quail and pheasant populations that live in the thousands of acres farmers leave unplanted each year as part of a federal program aimed at environmental conservation. The team of SIUC researchers, headed by zoology Associate Professor Don Sparling and forestry Assistant Professor Clay Nielsen, are embarking on five-year, $450,000 study examining the best ways farmers enrolled in the Conservation Reserve Program can manage their land to promote bird populations. (Photo provided) Download Photo Here

CARBONDALE, Ill – When researchers from Southern Illinois University Carbondale start hunting upland game birds in the grassy fields of central and northern Illinois this fall, they won’t be carrying shotguns.

Instead, the scientists will be scaring up better ways to manage the lands to promote quail and pheasant populations that live in the thousands of acres farmers leave unplanted each year as part of a federal program aimed at environmental conservation.

The team of SIUC researchers, headed by zoology Associate Professor Don Sparling and forestry Assistant Professor Clay Nielsen, are embarking on five-year, $450,000 study examining the best ways farmers enrolled in the Conservation Reserve Program (CRP) can manage their land during the 10- to 15-year-long agreements they enter with the federal government. The team plans to begin experimenting next spring with a combination of land management practices such as disking, spraying herbicide and reseeding on portions of up to 2,000 CRP acres upstate.

Land left out of production in Illinois tends to become covered in various types of thick grasses. Such grasses can become almost impenetrable for ground-dwelling birds such as bobwhite quail and ring-neck pheasants, both of which are popular with hunters.

“The first few years that land is very productive for birds,” Sparling said. “But as years go by and ground cover becomes really dense with a thick thatch layer on the ground a lot of the birds -- especially ground-dwelling birds like the pheasants and quail we’re looking at -- their chicks have a very hard time just walking through that. The grasslands become dominated by single species of grass that chokes out other plants and native wildflowers and makes it difficult for animals, too.”

Such hardships, combined with an overall loss of habitat, equates to declining populations, said Doug Osborne, a researcher with the SIUC Cooperative Wildlife Research Laboratory who recently earned his doctorate at SIUC and is part of the research team. Illinois’ vast prairies once gave sanctuary to those and other species, but idle farmlands now must stand in for such environments.

“We’re down to only about 1 percent of the original prairie lands that the state once had,” Osborne said. “These fields we’re studying, these grasslands, serve as sort of replacement prairies.”

Bobwhite quail populations in Illinois have declined about 1.6 percent per year for the last three decades, Osborne said. With that in mind, the researchers jumped at the chance to give CRP participants sound, scientifically based information that will allow them to promote the birds’ survival at a minimum cost.

The grant, which is funded by the U.S. Fish and Wildlife Service through the Illinois Department of Natural Resources, will focus on “mid-contract” management practices for CRP participants in nine Illinois counties. In central Illinois, those counties are Logan, DeWitt, McLean and Tazewell. In northern Illinois, those counties are Henry, Bureau, Whiteside, Carroll and Knox.

Researchers want to know what will lead to the best overall habitat for the birds and reproductive needs. That means a balance between good cover and food sources. What type of management works best in a region likely will depend on what type of grasses are growing there, as well as how much a CRP participant might want to spend. The CRP program also pays part of the cost for participants to conduct mid-contract management practices.

For instance, Osborne’s previous work in this area focused on Southern Illinois, and the tall, thick fescue that tends to dominate fields in this area. In that situation, he found that disking a field -- a process by which a farmer pulls a plow-like implement through a field and turns over the soil -- helped very little in mitigating the situation. Herbicide spraying, as well as spraying followed by planting legumes, however, were both quite effective and helped bird populations.

In the current study, the researchers will look at practices to manage so-called “cool season” and “warm season” grasses that grow in those counties. One grass, known as smooth brome, a non-native species that is low in cost and prevents erosion, can look almost like a typical lawn when mowed, while others are thick and rough. Either type can pose an obstacle to bird populations if left unmanaged.

To figure out what management practice best controls each grass for bird populations, the researchers must first establish how well the birds and plants currently are faring. Doctoral student Justin Shew will lead other SIUC student technicians in conducting plant surveys and bird population density surveys on those acres to determine the land’s current characteristics.

To calculate the bird territory density, Shew will use a method known as “spot mapping,” which involves spending lots of times listening for and marking the locations of singing male birds calling mates and setting up their territories. By counting the number of singing males, the researchers can make a good estimate of the overall population density, as well as how many birds each acre can sustain.

The research team will leave some acres untouched to serve as experimental controls. In the others, they will experiment with a combination of disking, herbicide and reseeding with native flowers and legumes. They then will conduct follow-up plant and bird surveys to determine the effect of those methods.

The team started work on the project this summer, working with conservations groups such as Quail Unlimited and Pheasants Forever to locate cooperative landowners who share their interest in conservation and the environment.

“It’s hard to find the people who own this land in many cases and that’s where these groups have been very helpful,” Osborne said. “Many times, the land owners hunt as well, and they get right on board when we explain we want to help improve their land for increased bird populations.”

The team will repeat the surveys and management method experiments for four years, crunching data and writing its findings the last two years.

“I’ve had experience working with birds in different parts of the world and research involving North American grassland birds is especially important because this bird guild is in steep decline,” said Shew, of St. Louis. “Survey trends show grassland birds are declining and it’s mainly attributed to habitat loss from agricultural development. It’s a national concern.”

The IDNR is working with and supporting the researchers. As an added bonus, Shew will also conduct a reptile and amphibian survey and a survey of grassland dependent songbirds while he is working on the main focus of quail and pheasants.

While bobwhite quail have been declining in Illinois, they are doing well in other parts of the country. Still, Osborne hopes the population density numbers that the team collects will help a national effort to conserve bobwhite quail.

“Our numbers can plug into that plan and be very important to the overall effort,” he said.