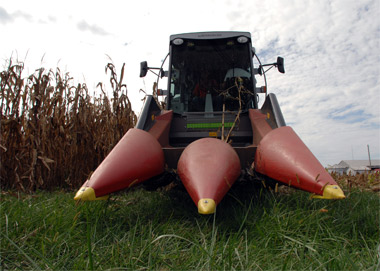 CARBONDALE, Ill. -- A $492,000 grant from the federal Department of Energy will allow the College of Agricultural Sciences at Southern Illinois University Carbondale to do more research on energy crops and do it better.

“It supplies the critical equipment that we were lacking to increase both our scope and our capacity on the production side,” said Professor Bryan G. Young, who served as liaison on the proposal.

“It will allow us to look at elements such as genetics, seeding rates and variable rate chemical application on both a small and large scale.”

Much of the equipment features GPS, or global positioning system, technology that commercial growers rely on for greater precision in everything from yield tracking to chemical application. The big-ticket item, a small-plot combine that will allow researchers to analyze and compare data from a strip of ground as small as two rows wide, arrived late in August and is currently in use harvesting plots at the University Farms. The grant also paid for a GPS-compatible tractor, a large-scale planter with variable seeding rate components and a field plot sprayer and helped underwrite the costs of a large-platform combine.

In addition to the wealth of data the small combine can supply and its ability to maneuver through small patches of ground, it is also easier to clean, Young said.

“That’s important because we could be testing crop traits that are still under development, so we don’t want cross contamination.”

The combine comes with an on-board grinder, too.

“If we’re testing seed not intended for commercial use, then as soon as the grain is harvested, it goes down the side of the combine where it’s ground up, so it loses the ability to reproduce,” Young noted. “It then returns to the soil, thereby adding an extra layer of organic matter.”

The large-scale planter will allow the researchers to test seed that looked good in the small plots to see how it performs under commercial conditions, while the sprayer can function in areas both large and small. Both pieces also run GPS programs.

“Together, the new equipment gives us information from start to finish on crop production that can help us realize greater efficiencies in renewable crop energy sources,” Young said.