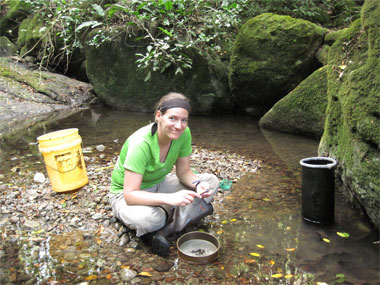 Stream research -- Amanda Rugenski, a doctoral student at Southern Illinois University Carbondale, sits near a high mountain stream in Panama as she conducts research recently. Rugenski is part of an effort led in part by SIUC zoology Professor Matt Whiles to find out how these streams are changing as a fungus deadly to amphibians marches through the area. (Photo provided) Download Photo Here

CARBONDALE, Ill -- The catastrophic decline in the number of frogs in Central America documented by Southern Illinois University Carbondale researchers during the last few years is changing the ecology of streams throughout that region as well, SIUC scientists say.

Specifically, the dearth of tadpoles in high-mountain, headwater streams of Panama is drastically changing the way an important nutrient cycles through the food web, which could point to less ecological stability within the system.

Matt Whiles, professor in the Department of Zoology in the College of Science, said a disease that is killing off frogs and tadpoles is disrupting the nitrogen cycle in those streams. As an important “limiting nutrient,” nitrogen has a major impact on the ecological balance in the environment.

“With nitrogen, when you have too much or not enough, it’s bad,” said Whiles, who has helped study the drastic decline of frogs in Central America for years. His latest National Science Foundation grant provides SIUC with $365,000 in funding through 2012.

“If it’s in short supply and you add a little, good things can happen. If there is too much, it can cause problems like algae blooms and poor water quality,” Whiles said. “So understanding the nitrogen cycle in any capacity is always interesting. It’s important; one of those critical cycles.”

A malevolent fungus targeting frogs has continued a deadly march across the area for more than a decade. Whiles, along with former SIUC zoology professor Karen Lips, has documented its effects, with Whiles concentrating on the ecological fallout that occurs when an area loses more than 90 percent of its frogs.

SIUC researchers, along with others from the University of Georgia, Drexel University and the University of Maryland (where Lips now works), are following the disease and its effects. Working with doctoral student Amanda Rugenski and graduate student Therese Frauendorf, Whiles most recently modeled the nitrogen cycle in streams high in the mountains of Panama.

To model the cycle, the team visited the cool, wet high mountain forests and slowly added a stable isotope of nitrogen known as “N 15” to streams located there. In the months that followed, they took samples of tadpoles, plants and other living things, using mass spectrometry to trace the isotope as it entered and left the food web.

“The bacteria and algae readily take it up as we add it, and the tadpoles graze on the algae. So we could follow this nutrient as it began to move through the food web,” Whiles said, explaining that the team looked at the ratio between the N 15, which they added, and the more common N 14 to model the nitrogen’s presence as it entered and left the food web.

The researchers added N 15 and took measurements both before and after the fungus hit the areas, looking for the changes that followed after the streams lost 95 percent of their tadpoles. Each experiment took about three months. They found some troubling results.

“When you suddenly lose all the tadpoles that are in those streams, the streams themselves change,” Whiles said.

Nitrogen is a major building block of all living things. Typically, tadpoles take up nitrogen in their food, convert it to biomass and then excrete the leftover as ammonia, which is readily taken up by algae and microbes. Tadpoles then consume those life forms, completing a cycle.

Before the fungus hit, the researchers found the nitrogen cycled through the system in a “tight” pattern, meaning the system conserved the nutrient and used it quickly and efficiently. But after the tadpoles were gone the system did not retain as much nitrogen, meaning there was less biological uptake.

“We found it sort of became a dead end for the nitrogen,” Whiles said. “A lot of it is probably instead exported out of the area, although one of the major functions of a headwater stream is the uptake and retention of nitrogen. When you lose tadpoles, there is less nutrient uptake so you’re losing an ecological function there.

“The streams functioned at a lower rate after the tadpoles were gone,” he said. “We look at nutrient uptake and retention as an ecosystem function. We saw that the streams are beginning to lose function and they’re not nearly as efficient.”

Other possible effects include an impact on insects and stream-dwelling snakes that feed on tadpoles and frogs. Though the researchers are only starting to study these questions, anecdotal evidence points to changes there, too.

“The snakes are losing their food source of frogs, frog eggs and tadpoles,” he said. “There is definitely a change going on. It’s not clear yet if those snakes are moving away from the streams and deeper into the forests, but they appear to be declining along with the amphibians.”

Whiles recently presented the results of the latest findings at a meeting of the North American Benthological Society. He continues analyzing data for a formal paper submission later this year.

With an alarming number of species becoming extinct worldwide, Whiles said ecologists are very interested in the overall effects of the loss of biodiversity. The impact of catastrophic amphibian losses in these streams may reflect how this issue will play out elsewhere.

“That’s the context of our findings, and we’re finding this type of catastrophic loss is changing ecosystem function. Nutrient uptake is changing,” Whiles said.

Also, the findings shed light on the concept of what researchers call “functional redundancy,” which describes the idea of similar species taking the place of another one that is lost in the ecological system.

“What we’re finding is that there is very little functional redundancy,” Whiles said. “There’s nothing in these systems that’s compensating for the loss of tadpoles. We’ve seen some minor shifts in grazing insects that might respond positively to having more algae available, but nothing taking over role of tadpoles. That’s an important finding in light of declining biodiversity in general.”

“You have to wonder, if we go from 10 species to two species in a system, can they keep it going? Our finding is that we’re losing function. It’s not a total collapse yet but nothing has stepped in. The implications for that are long-term instability. What happens when you have a major disturbance -- flood, droughts disease? The system becomes less resilient.”