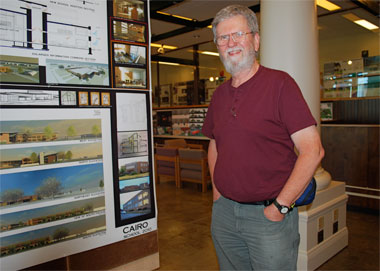 Job on campus/department you work in: Associate professor in the School of Architecture, also an architect.

People don’t know that you… Worked in Appalachia in the 60s and am researching “1800’s steamboat design and construction.”

If you could choose another profession, what would it be and why? Musician, because I love so many different kinds of music and admire the courage and skills of performing artists…especially solo artists.

What was the first “album” you ever bought, and was it an LP, 8-track or CD? Either an LP by the Four Freshman or Stan Kenton, or maybe the “Road Show” featuring both.

What is one random fact about you? I marched in John F. Kennedy’s inauguration parade and hitchhiked from Carbondale to Washington, D.C., to attend his funeral.

Cats or dogs? Both -- for different reasons. Cats because they can be friendly when they want to…and dogs, because they are so forgiving and loyal.

What is your favorite food and why? Bill’s BBQ in Metropolis or Shemwell’s in Cairo, because it’s so darn good!!! (putting it “mildly”). Although, Tippy’s coconut cream pie in Murphysboro runs a close second…and I almost forgot about the homemade ice cream and “pork burgers” at the St. John’s Lutheran Church ice cream social in Massac County every July. Now that’s good!!!

Who has inspired you, and how? My Dad, because he was a simple, humble, honest skilled and caring man.

What is your pet peeve? Intolerance and lack of empathy for others.

What would you like your gravestone to say about you? Modified from W.C. Fields’ epitaph -- “All things considered, I’d rather still be kayaking on Cedar Lake.”

Favorite cartoon character? Why? Most of the Doonesbury characters, because they represent so many of us so well.