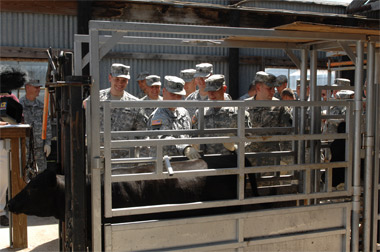 CARBONDALE, Ill. -- Early in their two-day training session at Southern Illinois University Carbondale, soldiers from Illinois’ first National Guard agricultural development team got an unusual hands-on assignment: Glove up, touch a poopy calf and then get the glove off without getting anything on themselves.

“We want to keep you safe,” said veterinarian Nancy R. Henry, an instructor in SIUC’s College of Agricultural Sciences, as she showed how it was done. “Some of the diseases animals in Afghanistan will have are zoonotic -- they can infect humans as well as other animals -- so any time you handle an animal, wear gloves and wash your hands very well before moving on to the next one.”

Henry was one of 11 SIUC ag faculty members offering tips on everything from goat wrangling to bug control to the 18 soldiers attending the training session Aug. 16-17. The new Guard unit -- 60 members strong when you count the security detachment -- will head to Afghanistan’s Kunar province sometime next spring charged with a new mission.

“Kunar is a mountain province with limited arable ground, a deforestation problem, a major river that regularly floods and an infrastructure damaged by both war and neglect,” said Col. Fred W. Allen, team commander and a Delavan farmer.

“Our main objective is to go in and build on what teams from California and Iowa have started there, establishing sustainable agriculture projects and systems that will continue to grow and develop whether the U.S. is present or not.”

Over the course of the training workshops, faculty instructors touched briefly on animal health, nutrition and handling; soil quality and testing; basic crop production; and forages and vegetables suitable for Afghanistan.

“This was intended to be a general introduction to get the juices flowing and get people thinking about what the needs are,” said John W. Groninger, an SIUC ag faculty member who organized the sessions.

“They’ll be coming back next spring for more specific training based on the general instruction and discussions spawned during this workshop.”

Several soldiers said they viewed the on-the-fly nature of sessions as a refresher course of sorts.

“Having been out of school for some time, the general review of information has been very helpful overall,” said Capt. David W. Weir of Raymond, a Guardsman for nearly 23 years.

Several soldiers appreciated the unique perspective three faculty members brought to the training. In addition to Groninger, a forester, economist Phillip R. Eberle and vegetable scientist S. Alan Walters all have worked on a series of projects aimed at rebuilding Afghanistan’s agricultural sector, and Eberle spent two years there as a Peace Corps volunteer in the ‘70s.

“It’s hard to replicate real-life experience,” Weir said. “Their personal knowledge of the area, projects, methods, available resources and so forth helps us to better prepare for our mission.”

Said Staff Sgt. Peter J. Frey of Oakland, “Prior to being notified that I would be involved in the mission, I had a very limited knowledge base and understanding of Afghanistan. Because its agriculture setting and infrastructure differs greatly from that of what we have here at home in the Midwest, it is important that we have a clear understanding of the country’s needs prior to our departure. Each picture and every story told has been extremely interesting.”

Matthew J. Duckworth, a first lieutenant from Emden who spent a year in Iraq, said he was surprised to learn that Kunar, a northern province bordering Pakistan, is largely forest.

“That’s not the mental image I had of Afghanistan,” he said.

“I was also surprised to learn that our mission will be less about ‘modernizing’ Afghan agriculture, as I envisioned it going into this, and more about overcoming cultural, religious, economic and physical constraints and limitations to help them develop a sustainable agriculture system within their means.”

Weir and Frey said the contacts they made during this session and expect to deepen the next time around are invaluable, both as a confidence booster and a resource when they’re out in the field.

“Those experts may provide data analysis, search for and send needed information, or confirm something we might have a question about,” Weir said.

Frey, who is also an SIUC forestry alum, said SIUC students and faculty could help them out in the field as well.

“If you want to organize the mailing of treats, snacks or other goodies, they would be gladly accepted, “ he said. “I like red licorice.”