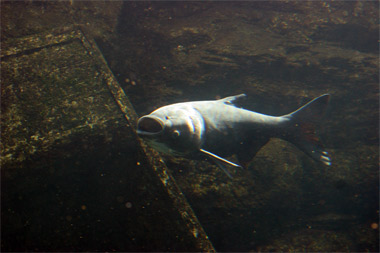 Unwelcome guest -- A bighead Asian carp swims in an Illinois waterway. Fishery researchers at Southern Illinois University Carbondale will receive a contract from the state worth $1.1 million that will help the fish industry take advantage of this invasive fish species even as it attempts to eradicate it. (Photo provided) Download Photo Here

CARBONDALE, Ill -- Researchers at Southern Illinois University Carbondale will receive a contract from the state worth $1.1 million that will help the fish industry take advantage of an invasive fish species even as it attempts to eradicate it.

James Garvey, director of the Fisheries & Illinois Aquaculture Center at SIUC, said the contract from the Illinois Department of Natural Resources will fund multiple studies of the Asian carp, which many believe threaten Illinois fisheries in the Great Lakes and its rivers. SIUC researchers will partner with the Illinois Natural History Survey to look for ways to establish a new fishery aimed at harvesting the Asian carp to the point of eradication here.

“We know the fish is in our waterways in great numbers, a large biomass,” Garvey said. “We want to find ways to use this fish while at the same time diminishing its presence here.”

Asian carp, a large, bony fish, are present in the upper and lower portions of the Mississippi River, the lower Missouri River, the Illinois River and Ohio River. Several varieties -- including the bighead and the silver, which can grow to 100 pounds and leap into the air -- are present in Illinois waterways.

During the last decade, the state has taken action to prevent the fish, which crowds out native species and damages their habitat, from becoming prevalent in the Great Lakes fisheries.

The contract will allow researchers using hydroacoustics to conduct population studies of the fish in the Illinois River. Researchers also will study the origin of the fish there and look at their quality as a food item or commercial product, Garvey said, examining factors such as their protein, fat and oil content.

The money also will help researchers, commercial fishing operations and processing plants find new ways to market the fish, which is a common food item in Asia and could potentially possess other economic value.

One of the main ideas behind the effort, however, is to diminish the fish’s numbers in local waters, where it can damage domestic fish numbers.

The contract comes on the heels of another Asian carp study the University completed for IDNR. That study focused on chemical markers found in a bighead Asian carp captured in Lake Calumet, about six miles below Lake Michigan in northern Illinois. The fish’s capture sent alarm bells ringing, Garvey said, because of its location above electronic barriers put in place to stop its migration from rivers to the Great Lakes.

Upon learning of the fish’s capture earlier this summer, Garvey approached the IDNR about a technique that SIUC zoology Assistant Professor Greg Whitledge uses to identify a fish’s environmental history. The technique involves removing and examining the fish’s otolith, a tiny bone found in its ear that grows with the fish while absorbing chemicals and elements from the water around it.

Whitledge’s examination found a concentration of the chemical element strontium in the bone that occurred during the 6-year-old fish’s first year of life. The strontium content was consistent with that of the Illinois River, leading researchers to conclude the fish originated there.

During its subsequent five years of life, however, the bone analysis showed the fish lived in a waterway more consistent with Lake Michigan, which is nearby and connected to Lake Calumet.

Garvey cautioned against drawing hard conclusions based on the case, due to unknowns and necessary assumptions. The preliminary results, however, point to the possibility that humans transported the fish -- intentionally or accidentally -- from the Illinois River to the lake system, where it was caught.

Researchers believe the species still has not taken up significant residence in the Great Lakes. But the findings underscore the need for the public to take precautions to avoid spreading the invasive species to other Illinois waterways, Garvey said.