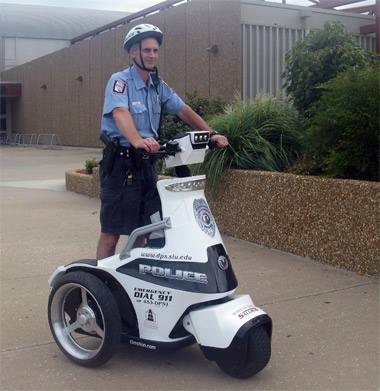 Rolling along on patrol -- Jamie Lipe, an officer with Southern Illinois University Carbondale’s Department of Public Safety, shows off the department’s newest addition, a T3 Motion all-electric personal patrol vehicle. The environmentally friendly three-wheel vehicle will allow officers easier access to some areas on campus, and features a top speed of 25 mph, a zero-turn radius, and costs about 10 cents per day in electricity. (Photo by Pete Rosenbery) Download Photo Here

CARBONDALE, Ill. -- The newest addition to Southern Illinois University Carbondale’s Department of Public Safety resembles a tricked-out chariot. But this all-electric personal patrol three-wheel vehicle is more cost-efficient and ecologically friendly than the ancient Egyptians and Romans could have imagined.

The department recently received a T3 Motion Series clean-energy electric stand-up vehicle to use on patrol. With a top speed of 25 mph, the three-wheel scooter features no gas emissions, has a zero-turn radius, and costs about 10 cents per day in electricity.

The vehicle will allow patrol officers easier access to some areas on campus and supplement existing vehicle and bike patrols, said Todd D. Sigler, director of the University’s Department of Public Safety.

The vehicle’s ease of maneuverability will lend itself to easier access for officers during large events, such as student move-in days, football games, and other large events on campus. Sigler also anticipates the vehicle, which is extremely quiet, will be useful for patrols in buildings, particularly larger buildings, such as Morris Library.

“We think we can supplement patrols and patrol areas not easily served with foot patrols, such as around campus lake, Thompson Woods, and behind Morris Library,” Sigler said.

“When the weather is tolerable we believe this will be an asset,” he said. “There are a lot of areas on campus where there are patrols that you can’t easily do with a vehicle.”

A majority of officers has trained on the vehicle, said police officer Russ Thomas, coordinator of the department’s all-hazards preparedness and crime prevention unit.

“This is going to be a nice addition to the department,” Thomas said.

Officers stand on a platform about eight inches off the ground, allowing for greater visibility for police, and pedestrians who might need police assistance, officer Jamie Lipe said.

A pair of rechargeable lightweight batteries run for up to eight hours, enough to cover a shift before the need to swap batteries.

“This gets everyone’s attention,” said Lipe, who was on patrol one morning earlier this week.

The vehicle lends itself to enhanced community policing efforts through interaction with pedestrians and students, who often shy away from looking at officers while they are on foot patrol, he said.

“They have to look at this. This gives us another opportunity for interaction,” Lipe said, noting he already talked with about a dozen people during his first hour on patrol.

The department received a grant from the University’s Sustainability Council, with funds coming from the University’s Green Fund. SIUC students support the Green Fund through a $10 per semester fee implemented during the fall 2009 semester as the result of a student-led initiative. The goal of the fee is providing a continuing income source for projects promoting energy efficiency, the use of renewable energy and sustainability.

“We believe this will be a benefit back to the students who are funding the fee,” Sigler said. “We intend to make it as accessible to the public and campus community as we can.”

Since initial production in 2006, 75 colleges and universities across the nation, in addition to numerous law enforcement and other agencies, now use the vehicle, said a spokesman for the company, based in Costa Mesa, Calif.

“We are seeing a real trend in law enforcement to try and supply coverage with more environmentally sound techniques,” Sigler said.

SIUC will calculate the savings over the next year, Sigler said. The vehicle will not do away with vehicle or bicycle patrols, he said. But Sigler expects some savings.

“Generally speaking, any time a squad car is not running or burning gas, not only is there a savings to the environment but for us financially,” he said. “This will not entirely replace a police cruiser but it certainly is an opportunity to utilize environmentally friendly technology and still be able to get the job done in an effective manner.”