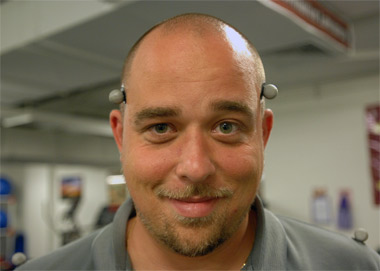 Shrek! -- With a striking resemblance to a popular cartoon character, John J. Bruno, a graduate student in kinesiology at Southern Illinois University Carbondale, models two of 17 reflective balls taped to his body from head to toe. (Photo by Steve Buhman) Download Photo Here

In his biomechanics lab on the SIUC campus, kinesiologist Michael W. Olson is using motion-capture equipment -- a mix of infrared cameras, reflective body markers and computer software -- to translate a person’s movements into digital form. With a few keystrokes, he can rotate the resulting images -- a group of dots, resembling a stick figure, moving across a grid -- for a clearer picture of what the movement looks like straight-on, from the side and from above.

“ This equipment lets me analyze things like gait speed, rotation of the trunk, arm swing, joint angles, all of which give me a better idea of how the movement is being performed,” Olson said.

While motion-capture technology animates the computer-generated creatures fabricated by game designers and filmmakers (think hordes of enemies in action games or all those teensy people falling off the Titanic), it started out as a biomechanics research tool. Such researchers study how the interplay of bones, tendons, muscles and ligaments move a human body.

“I deal a lot with neuromechanics (which adds the nervous system to the mix),” Olson said. “The equipment lets me evaluate, for example, how a movement takes place, specific changes that might be occurring and whether those changes could be short or long term.”

“Because you can get a pretty good idea of how a body part is moving as someone performs an activity, you can analyze the overall movement and provide a corrective measure for that skill,” Olson said.

But he also is focusing on a wider application of this technology.

“What I would like to do is use the equipment to look at individuals who will be going through surgery (knees, backs, hips) or who have been injured or who have neurological disorders,” Olson said.

“When you have surgery, for example, you don’t move the same way afterward. If we could do some analysis before the surgery, we could see what your initial movement looks like. If you’d had a stroke, we could monitor what the unaffected side was doing as compared to your affected side. In both cases, we could then work with your doctor or physical therapist to enhance your treatment and monitor your progress over time. This would help you function more normally and feel more independent.”

Olson is looking to approach health care providers about working with them. Such partnerships would offer the region’s residents a unique service, he believes.

“The closest labs with motion-capture capability like this are in Champaign, Evansville, Ind., and St. Louis, Mo.,” Olson said.

In the meantime, he is teaching a laboratory techniques course this summer to help graduate students learn how to use the tool.

“They’re getting fairly intimate with it,” he said with a grin.