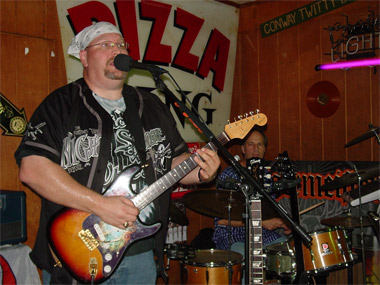 Job on campus/department you work in: Associate professor, rehabilitation counseling and administration/Rehabilitation Institute.

How long at SIUC: Five years.

Hometown: Hard to say…. My “home” is probably western Pennsylvania; I grew up in Marietta, Ohio, though.

When you were a youngster, what did you want to be when you grew up? A psychologist.

If you could choose another profession, what would it be and why? If you could make a living at it, I probably would have been a musician.

What is one random fact about you? My undergraduate major was 19th century European intellectual history, and I did most of my undergraduate research on the Grateful Dead tour.

What was the first “album” you ever bought, and was it an LP, 8-track or CD? LP… Eagles’ “Hotel California.”

What is your favorite food and why? I love Thai food because I enjoy spicy food.

Who has inspired you, and how? Ram Dass and Wavy Gravy for their transformations from political radicals to healers as well as for their contributions to public awareness of the needs of persons with disabilities.

What would you like your gravestone to say about you? He was a caring husband, father, friend, and colleague.