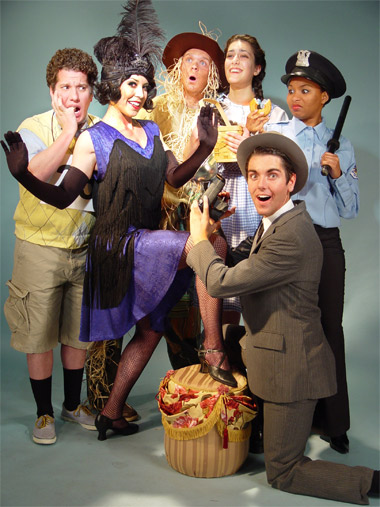 The season opens with Unnecessary Farce, a comedy about two “wanna-be” police officers conducting an unofficial sting who encounter a hit man for the Scottish mafia. Set in adjoining rooms in a cheap motel, the “cops” have rigged a surveillance camera to catch the mayor, suspected of embezzlement, in a secret meeting with his female accountant. But who is watching whom, which room is which, and what happens to the money is up for grabs in this fast-paced, fall-down-laughing riot of a show.

The musical The 25th Annual Putnam County Spelling Bee plays in rotation with “Unnecessary Farce.” Featuring six children and four adult audience members chosen nightly, this contest for the championship spelling title brings unrehearsed and surprising laughs to each and every performance.

The third show of the season is the Tony Award winner The Drowsy Chaperone. This clever show tells the story of a theater aficionado who listens to recordings of old musicals whenever he feels blue. When he picks a hit from 1928, the production comes alive in all its Broadway dazzle right in the middle of his drab apartment. The story he watches unfold is of a Broadway starlet whose efforts to give up the spotlight for marriage meets obstacles, such as her big-time producer, the gangsters who lent him money, and the machinations of jealous up-and-comers.

The musical plays two weekends, July 9-11 and 16-18. Friday and Saturday performances are at 7:30 p.m., and the Sunday matinee performances begin at 2 p.m. George Pinney, Emmy Award and Tony Award-winner and an SIUC alumnus, directs.

The final production of the MSP 2010 season is the family classic The Wizard of Oz. We’re off to see the Wizard as we join Dorothy, the Tinman, the Scarecrow, and the Cowardly Lion in their timeless journey “home.” This production is the Royal Shakespeare Company’s adaptation of the L. Frank Baum novel, and includes the hits “Over the Rainbow,” “Ding, Dong, the Witch is Dead,” and “If Only I Had a Brain.” As is MSP tradition, this production is in conjunction with the Carbondale Community Arts’ All Southern High School Theater Project.

This is the sixth season for the McLeod Summer Playhouse since it re-opened after a several year hiatus. Summer productions at the McLeod Theater date back to 1971, with intermittent programming dating back to 1959.