Paced by a first-place finish in message drop by senior co-captain Michael A. Carroll andJordan J. Miller, the squad relied on its depth to finish fourth in the 29-team competition last week.

The Flying Salukis placed in nine of 11 events, and nine members scored to finish with 271 points, 10 more than a year ago when the team was fifth in the nation. Defending national champion University of North Dakota repeated the feat with 474 points. Embry-Riddle Aeronautical University-Daytona was second with 375 points, and Embry-Riddle Aeronautical University-Prescott was third with 294. The Flying Salukis edged out the U.S. Air Force Academy by one point for fourth place.

The top 20 scorers in each of the 11 events earned points toward the team score. This year’s competition was at Indiana State University at Hulman Field in Terre Haute, Ind.

“This was a well-balanced team with almost everyone competing in an event placing and earning points for the team,” said coach Nathan J. Lincoln, a senior lecturer in the Department of Aviation Management and Flight. Team members organized study groups on their own starting in January, several weeks before scheduled practices started, to prepare for the 2010 SAFECON event.

“This is a great team to work with,” Lincoln said. “When you have team members taking it upon themselves to push each other to excel it makes a lot of our coaching job easier.”

“To come out and win that is great recognition for the time and effort that he puts into these events,” Lincoln said.

Jeffrey D. Jaynes, an assistant instructor in aviation management and flight, was first in the nation in the certified flight instructor event. The win “shows the quality of our instructional staff,” Lincoln said.

David A. NewMyer, department chair, said he is proud of the team’s performance, particularly when considering the strength of the competition.

The Flying Salukis provide another example of the strength of the University’s aviation program, he said.

The Flying Salukis have seven NIFA national titles -- the last in 1985. The team’s recent history includes a fourth-place finish in 2004 and fifth-place finishes in 2006 and 2009.

The Flying Salukis were fourth in the flight events and fifth in the ground events.

Carroll was the drop master and Miller was pilot in the message drop. Carroll tied for ninth for the top pilot award, and was also chosen outstanding team member.

The message drop is a fun event where competitors drop a six-inch by one-and-one-half inch rectangular piece of balsa wood with a streamer attached to it from 200 feet while flying at about 90 knots. The event is one the Flying Salukis always do well in, Lincoln said.

A senior in aviation management, Carroll was fourth in short-field approach and landing, and 17th in aircraft recognition. He is the son of Karen and James Carroll of Normal.

Miller, a senior in aviation management, placed in two other events. He was an observer with pilot Michael A. LeFevre in a 12th-place finish in navigation, and was third in aircraft preflight inspection. Miller is the son of Jill and Dennis Miller of Sandwich.

LeFevre, a senior co-captain, tied with Carroll for 11th place as top scoring male competitor. LeFevre also placed seventh in short-field approach and landing, 12th in computer accuracy, and he and pilot Michael C. Laurishke finished 19th in message drop.LeFevre is the son of Stacy and Mark LeFevre of Ashton.

Laurishke, a senior in aviation flight, placed in five events. He was fifth in IFR simulator, and was an observer with pilot Ryan E. Buttney for a 15th-place finish in navigation. He was 14th in short-field approach and landing, and 15th in computer accuracy.Laurishke is the son of Yola and Craig Laurishke of Lake in the Hills.

Buttney, a senior in aviation flight, also tied for 11th in short-field approach and landing and 20th in computer accuracy. He is the son of Catherine and John Buttney of Lemont.

Harrington was sixth in both SCAN and aircraft preflight inspection events, and 11th in computer accuracy. A junior in aviation management, he is the son of Nancy Curry of Monee and Daniel Harrington of Kankakee.

Marc L. Chyba, a senior in aviation management, was 13th in aircraft recognition. He is the son of Lawrence and Mary Lynn Chyba of Chicago.

Taylor M. Breum, a sophomore in aviation flight, was ninth in simulator. He is the son of Janet and Terry Breum of Lake Villa.

David T. Brown, a senior in aviation management, was ninth in SCAN. He is the son of Marlene and Scott Brown of Chicago.

Other Flying Salukis for the 2010 spring semester were:

The team will have three captains this fall. Carroll, who graduates in December, returns as a captain, along with Harrington and Buttney.

The team is losing four seniors, including LeFevre, Miller, Chyba, and Shannon Roth as it will try to win a fourth straight Region VIII title. The competition is Oct. 12-16 at the University of Illinois Urbana-Champaign’s Willard Airport in Savoy.

“We are losing a couple of very important points makers coming up to regionals,” Lincoln said. “But with a lot of time and effort we can replace them and still do well at our regional competition.” 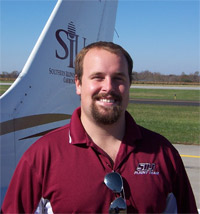 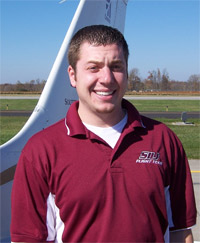 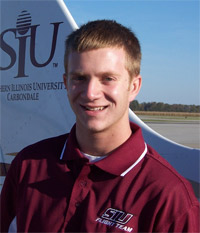