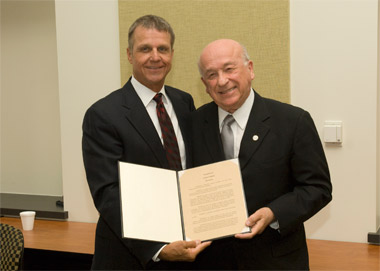 Goldman honored -- SIU Board of Trustees Chairman Roger Tedrick (left) presents SIUC Chancellor Samuel Goldman with a resolution honoring him for his service to the University. Goldman is retiring at the end of May. (Photo by Steve Buhman) Download Photo Here

Goldman recognized by SIU Board of Trustees

CARBONDALE, Ill. -- The Southern Illinois University Board of Trustees on Thursday, May 13, honored SIU Carbondale Chancellor Samuel Goldman, who is retiring at the end of this month.

Meeting at the School of Dental Medicine in Alton, the board conferred on Goldman the title of “chancellor emeritus,” effective with his retirement on May 31.

The resolution approved by the board cites Goldman’s “exemplary” record of service to the community, including: chairing the Carbondale Human Relations Commission, and serving as a certified clergy volunteer at the Illinois Youth Center in Murphysboro, Memorial Hospital of Carbondale, the Veterans Affairs Medical Center in Marion, St. Joseph’s Hospital in Murphysboro and Herrin Hospital.

In addition, the resolution notes the addition or modification of several degree programs during his two-year tenure as chancellor, including: online MBA program, the master’s and doctoral concentrations in applied psychology and brain and cognitive sciences, the professional science master’s in advanced energy and fuels management, and the joint SIU Edwardsville and SIUC nursing program.

The resolution also notes that while serving as chancellor, “he worked with colleagues to broaden the University’s international reach in recruiting students, successfully negotiating agreements with universities located in many different countries, including China, Malaysia, Saudi Arabia and Kuwait.”

Goldman also “skillfully navigated” the University through the May 8, 2009, wind storm, including commencement ceremonies and subsequent clean-up efforts.

Prior to coming to SIUC, Goldman served on the faculties of Ohio University, Syracuse University, New York University and Oklahoma State University. At Syracuse, he also served as a director and department chair.

He joined SIUC in 1980, two years after becoming a naturalized citizen of the U.S. Positions at SIUC included professor, director, dean, professor emeritus and member of the Board of Trustees.